Get Ready for Magic, Shifters, and the Coolest Cat Ever! #CataclysmicShift 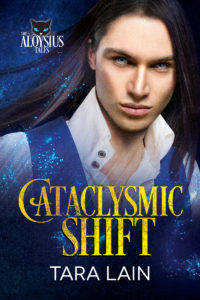 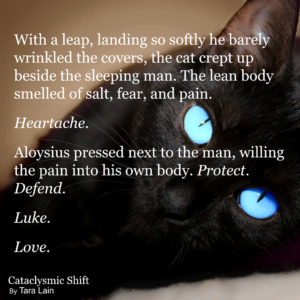 I’m so excited to tell you that the re-release of Cataclysmic Shift is only 3 days away. This is a book in my paranormal series called The Aloysius Tales, and the first time it released, some mix ups in categorization meant a lot of people missed the book. If you’ve read either of the other Aloysius Tales — Spell Cat or Brush with Catastrophe — and enjoyed them then you’re not going to want to miss Cataclysmic Shift. But you don’t have to have read those books to enjoy this one.

This story includes not only witches like the other books, but also a shifter, and the coolest cat ever, Aloysius. 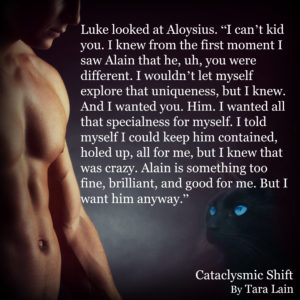 Here is the blurb —

Aloysius, the magical black cat and powerful witch’s familiar, isn’t afraid to go into battle to protect his master, but the outcome of the fight turns his feline world upside down. A direct hit of magic steals not only his memories and power, but even the body he’s lived in for several centuries. When he wakes up naked on the floor of a veterinarian’s office, it isn’t as the cat Aloysius, but as the sixteenth-century French gentleman Alain Bellarose. And when Alain sees sexy and enigmatic veterinarian Luke Elliott, he decides he’ll make the best of his time as a human.

Luke is a man with secrets who generally prefers the company of animals—though the flamboyant boy who washes his face with the side of his hand and tries to lick his own privates might prove an exception.

Meanwhile, Witch Master Killian Barth and his secret weapon, Sammy, struggle without Aloysius’s power to draw on. Two evil females are circling, and seeing the coven’s weakness, they’re about to move in for the kill. When Alain’s memories return, he’s faced with the ultimate dilemma: protect his community or stay with the man he loves.

You can buy it at HERE. The release is September 13th and there will be a blog tour with a nice prize, so be sure to visit!  : )