The Case of the Voracious Vintner Re-Released! Love More Complex that a Good Pinot Noir.

Hi. In the midst of all the scary things happening right now, it’s a relief to be able to release something that’s fun and prevails happily over a lot of stress. I’m delighted to re-release THE CASE OF THE VORACIOUS VINTNER, my who-done-it mystery that takes place in the wine countries of California. You might not have realized that California actually has several wine regions. In addition to the famous Napa and Sonoma areas of northern of San Francisco (which are absolutely beautiful, by the way), there’s also a wonderful central coast wine country around Paso Robles famous for its red zinfandel. That’s where THE CASE OF THE VORACIOUS VINTNER is centered, although the characters visit the northern wineries too. In fact, even some of the wine country of the state of New York figures in the story.

My honey and I have spent lots of fun times in all these wine countries and I had a great time revisiting them in this book. I hope you’ll love THE CASE OF THE VORCIOUS VINTNER! 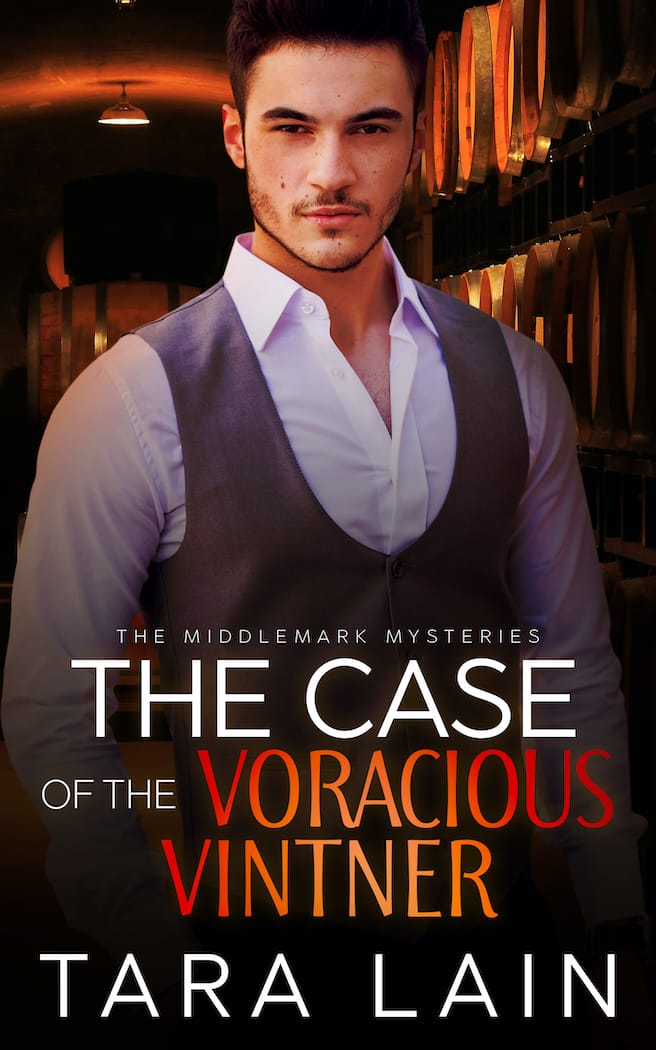 The Case of the Voracious Vintner is a MM, hidden identity, coming out, dysfunctional family, a visit to the wine county, canoodling in the riddling caves, lying to the police, romantic suspense mystery, with a whole lot of pinot noir.

Bo’s in the closet—
Jeremy’s not who he seems—
Local winemakers moonlight as kinky sex fiends–
And the voracious vintner, Ernest Ottersen, steals Jeremy’s secrets and his business.
But then somebody steals Ottersen’s life and Bo has to manufacture an alibi to keep Jeremy out of jail.

When he finds out who Jeremy really is, will he wish he’d stayed in the closet?

“Where’s your family? Clearly they didn’t follow you to California as mine did.”

“Uh, no. I don’t have any relatives to speak of.” That was the truth. He wouldn’t speak of them.

“Land of mercy, I can’t even imagine what that would be like.”

Jeremy snorted. “Sounds like you have enough relatives for both of us.”

“And the rest of central California as well.”

“Oh yes. In Georgia people don’t just want to know your name, they want to know who your grandparents were. Then they figure out how you’re related.” He turned those perfect lips into a half smile. “You’re always related somehow. Where are you from?”

Jeremy worked hard to keep his eyes level and not look away. “New York mostly.”

“Whatever possessed you to move all the way to the central coast of California? They make good wine in New York.”

“I was ready for a change and nothing to keep me there.” They tried to keep him there, but he got away.

“Would you like dessert?” Bo’s lips curled around that word so deliciously, Jeremy could think of a lot of sweets he’d like in his mouth. He shifted on his seat.

“Yes.” They did that eye thing again, and the impact of those crystal green eyes built up in Jeremy to the point that the possibility of coming in his pants was a real threat.

Jeremy cleared his throat. “Let me get the check, okay? You’ve done all the serious thinking.” He grinned.

For a second Bo looked as if he might demur, but finally he nodded. “Thank you most kindly. I’ll get it next time.”

Jeremy did like that there would be a next time. He motioned to the waitress for the bill.

Bo said, “Did you always want to make wine?”

Amid all the shit he couldn’t tell the truth about, that was an easy question. “Yes. When I was a little kid and other rug rats were downing Cokes and cheeseburgers, I was reading the labels on wine bottles and scanning my mother’s cookbooks for exotic recipes. I didn’t know I was gay until I was about twelve, but I knew I was different really young.”

Bo got a funny expression on his face. Kind of sad.

Jeremy gave him a smile. “No need to feel bad for me. I’ve always loved being weird.” That was pretty much the truth.

Bo smiled. “I understand. I’m quite the black sheep of my clan as well.”

Jeremy held up his glass with a last splash of wine in it. “Hard to imagine for such a pillar of the community, but here’s to all us freaks.”

They clinked and downed the last of their wine.