PRANCING OF A PAPILLON by Tara Lain is Here! Now on Amazon and in #KU

They’re HERE. PRANCING OF A PAPILLON is released!

Meet Jericho Jones — “I hate sports, know nothing about them. I’m not a guy you can pick a fight with. I’m not brave and certainly not an alpha male. By all rights, I should have been born looking less like the man with the golden gun and more like Tim Gunn. Then maybe people would see me and understand what they’re getting. As it is, if I hear ‘I’ll bet you play football’ one more time, I’ll start throwing things and none of them are footballs.” Jericho falls for billionaire dog owner Brees Apollonia. They couldn’t be more different on the surface. But Brees has this way of getting in trouble and Jericho needs to rise to the occasion. Of course, he has help!!

PRANCING OF A PAPILLON  is part comedy, part mystery, and all romance!  Grab your copy on Amazon or read it free in KU.

This is book 2 in the Fuzzy Love Series. It’s totally stand alone, but you can read more about Batshit’s adventures in PASSIONS OF A PAPILLON. 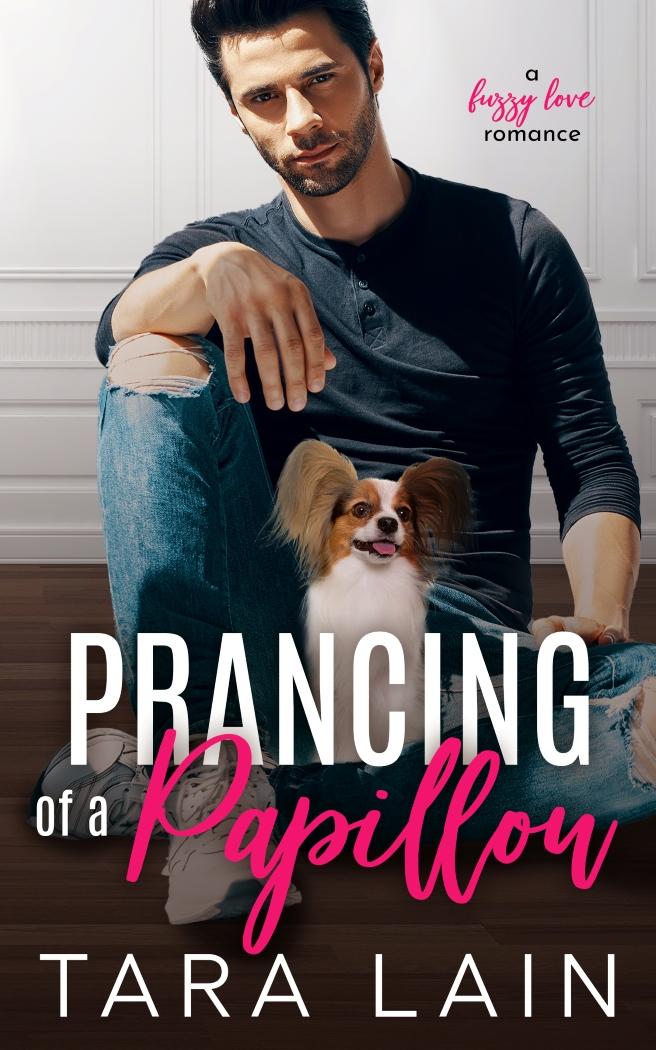 Opposites attracting, billionaires getting kidnapped, a Papillon who’s smarter than you are, and near-death at a dog show….

Jericho Jones is giving up on social life. What social life? Six-foot-five and packed with muscles he barely earned, Jericho looks like an alpha top, when he’s actually a gentle bottom who teaches first grade and lives with his hypochondriac mother. When Jericho’s friends, Finn and Em, suggest he accompany Finn to a dog show as the handler for their Papillon, Batshit, he decides, while he might be the world’s least likely Papillon prancer, he’d be grateful for a new experience and a few days away from Mama.

Jericho’s prepared to take dog handling seriously, but he’s not prepared for the pure lust he feels for wealthy dog owner, Brees Apollonia, a guy totally out of Jericho’s league. But Brees’s family issues make Jericho’s look tame – his father wants to marry him to the daughter of a prospective business partner. When Brees starts being followed by unknown guys, he thinks his father’s trying to scare him and uses it as an excuse to be “protected” by big, hunky Jericho. But pretend gets way out of control, and suddenly the only thing between Brees and possible death is a smart dog with big ears, three intrepid women, and gentle wimp, Jericho Jones.

Excerpt from Prancing of a Papillon

Jericho Jones slid a big hand down the back of each of the two dogs that occupied his lap. Technically, according to some silly restaurant law, they were supposed to be on the ground, but Café Z was lenient on the patio. Hell, half the people in Corona del Mar had meals with their dogs, so Z would have lost most of their customers if they weren’t flexible.

Jericho giggled and wiped the slobber, but from Jericho’s other leg, Killer got a look of total disdain from Batshit, the eight-pound Papillon with ears the size of Nevada and an attitude far larger. Her withering expression said, Barbarian.

Jericho had borrowed Batshit from his friends, Finn and Em, for his blind date because she had impeccable taste. Jericho figured if the guy he was meeting for lunch passed the inspection of Batshit, he must be okay. Killer didn’t like much of anybody, so he wasn’t a good judge of character. Mostly, though, Jericho had just wanted the two dogs for moral support. He was crap at blind dates. Hell, he was crap at all dates, and if this one didn’t work, he’d pretty much decided to call it on social life.

Jericho looked down at Bat who was staring toward the entrance to the restaurant patio. Deliberately, he raised his head. Standing inside the gate from the sidewalk stood a medium-tall, slim, fair-haired man who looked like Draco Malfoy grown up. He wore skin-tight gray jeans and a form-fitting white sweater that might be silk—or maybe nylon. Could he possibly be for me? The photo his blind date had posted online was from a distance, which was usually bad news, and all Jericho had really seen was pale hair. But this guy was tres cute.

Jericho put the dogs on the slate of the patio—amazingly, they let him—and rose. If the man turned out to be somebody else’s date, and that was likely, Jericho could pretend he’d been looking down the street. The guy glanced toward him and Jericho felt his hand raise on its own. A slow smile spread over’s the man’s face and he started toward Jericho. Be still my foolish heart.

He stopped on the other side of the table and said, “Jericho?”

“That’s me.” He flashed white teeth and pressed a hand to his chest. “Man, how did I get so lucky?”

Right off, that worried Jericho, but he said, “I, uh, was just thinking the same thing.” He couldn’t quite stifle his giggle. He only giggled when he was nervous. “Please sit down.” He waved a hand toward the chair next to him.

The slight crease that popped between Malcolm’s nearly invisible eyebrows then vanished almost elicited a sigh from Jericho. Right, why couldn’t he learn to move his hands like a regular person—no, make that regular man—instead of some flaming ballet dancer? Don’t give up yet. Jericho sat and, of course, Batshit leaped immediately onto his lap. Killer had found a twig and was determinedly chewing on it, so he left the date interview to Bat.

Malcolm startled back in his chair, “Oh! What in the hell is that?”

Jericho smiled and resisted the urge to respond with Duh. “A dog. Actually, a Papillon, the princess of all dogs.”

“Oh.” Malcolm looked at her suspiciously and Batshit stared right back. He flipped his gaze up to Jericho. “So tell me, how tall are you?” He put a hand under his chin.

Jericho wanted to move his lips with Malcolm’s next question he’d heard it so many times. “I’ll bet you played football in college.”