Hi. A number of years ago, I wrote a wacky little novella in honor of Valentine’s Day called Hearts and Flour. It was based on an actual health food stand in Laguna Beach, CA. and took place at the height of the cupcake craze. What if a guy who was a raw food freak fell in love with a cupcake baker – but didn’t know who he was?

This little book packs it all in – enemies-to-lovers, a nasty villain, a wonderful grandma, and cross dressing. It’s slightly crazy and very romantic. Hope you enjoy it. 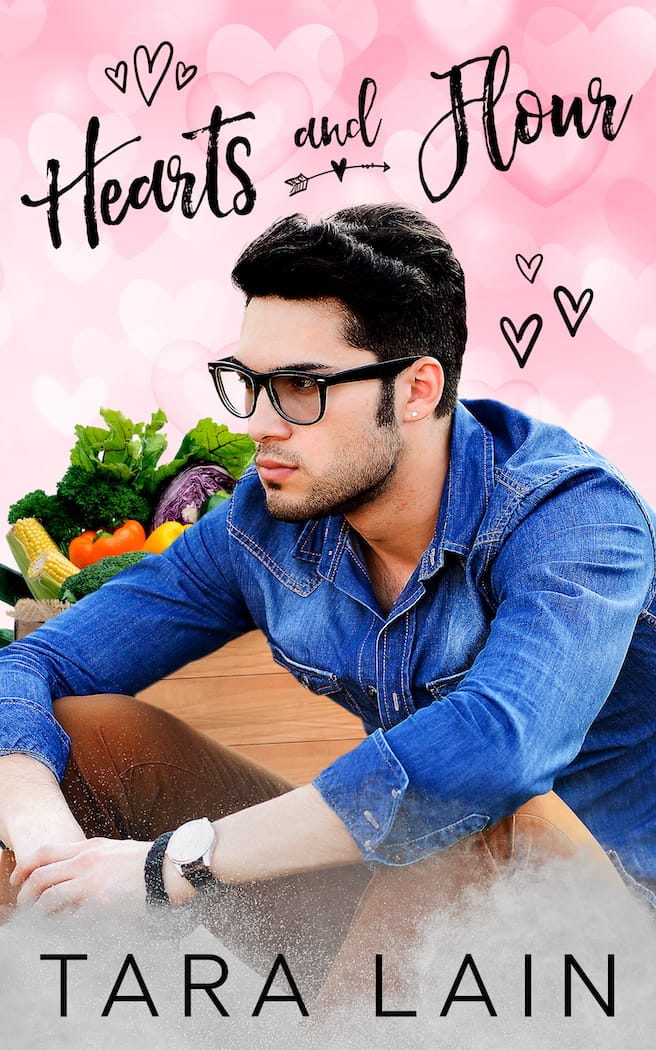 Hearts and Flour is an enemies-to-lovers, cross-dressing, hiding from grandma, romantic comedy with a scummy yoga teacher, a fabulous grandmother, and a whole lot of buttercream frosting.

Can two hearts rise above the flour?

On the same day he catches his boyfriend cheating, raw-food fanatic-Micah’s devotee customers start sinking their teeth into white-flour cupcakes from a brand-new bakery.

To forget his troubles, he heads for his friend’s orgiastic anti-Valentine’s party and meet’s the delicious, cross-dressing Queen.

But when Micah looks closely under Queen’s skirts, he finds more than the right equipment. Queen’s not all he seems, and the heat the two men generate may be set at 350 degrees for forty-five minutes!

Available at Amazon and on KU

Excerpt from Hearts and Flour

He pushed through the swinging kitchen door and found a couple of caterers laughing and gossiping quietly in a corner. Bet they had something to talk about. And there, back to him by the sink, was the woman.

As he looked at her now, Micah realized there was no way she could be a caterer, unless she owned the company. The red dress was silk and those four-inch stilettos would have paid his mortgage for a month. She wasn’t real tall. Even with the shoes, he guessed she’d be a little shorter than his six feet. Very slim with just a slight rounding at her hips, strong, lean legs, and willowy arms in the long sleeves. A mane of golden hair fell over her shoulders. The color looked real but well tended, like it cost a bundle to keep that silken shine.

Why the hell was he staring at her? Unlike his erstwhile boyfriend, he had no interest in women in any sexual or romantic sense. Never had. But what was she doing here?

She filled a glass from a spigot of filtered water.

Her head went back, so he assumed she was drinking. Suddenly she turned toward him, and he was staring into brilliant blue eyes. “Did you want some water too?”

Her voice was soft and low. A lilt suggested moonlight and magnolias.

She reached into a cabinet like she owned the place, pulled out a glass, and filled it from the spigot. Micah watched the play of muscles across the low back of her dress. Then she turned with the water glass extended. Man, what a beauty. Delicate, sculptured features—wide eyes, soft lips, a pointed chin—all surrounded by the velvet blanket of smooth gold hair.

Micah grinned. “Excellent question. You’re quite convincing as a woman. And very beautiful.” Jesus, his body didn’t care what the guy was. Total turn-on. Who knew he’d get excited over a cross-dresser?

He took it. His skin was so soft Micah could barely feel it except for the warmth that flowed straight to his balls. He smiled. “I’m called Queen.”

He smiled. Hell, it was practically demure. “No. Just a man who likes to wear women’s clothes sometimes.”

Micah was out of his depth here, but he felt willing to drown. “Like a transvestite?”

Queen sipped his water. “I prefer to avoid labels. I only get the chance to dress up occasionally. I’m perfectly happy in men’s clothes as well.”

Queen looked up through his lashes, which were darker than his hair. “How so?”

“I’m not usually attracted to women.”

Available at Amazon and on KU