COWBOYS DON’T COME OUT Re-Released. Get Your Cowboy On!

It’s not everyday your get to celebrate the holidays on Hana, Maui in Hawaii and two-step with a cowboy before sunbathing on a nude beach. But this is your day.

COWBOYS DON’T COME OUT is a most unusual cowboy romance. It takes place in Hawaii, which had cowboys before the mainland, and, in this book, a California rancher meets a Hawaiian paniolo on a vacation trip he didn’t want to take with his folks.

The blurb for this book tells you a lot and I hope you love COWBOYS DON’T COME OUT. 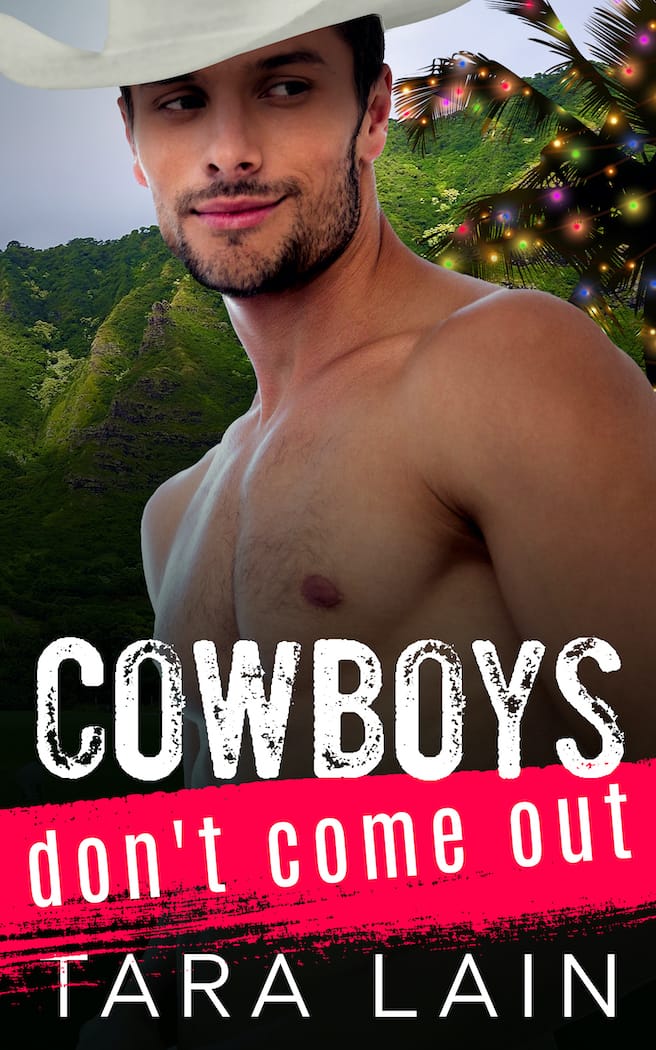 Is the closet big enough to hold two cowboys?

Rand McIntyre stays in the closet to protect what he’s built – his small California horse ranch and the privilege of teaching kids to ride.

Kai Kealoha, a genuine Hawaiian cowboy, stays closeted to protect his “kids”, the siblings he raises with no official approval.

Add in one detested holiday with parents at Hana Ranch on Maui and the two cowboys bond over a love of dancing, a nude beach, and each other’s beautiful butts.

But vacation sex doesn’t count, and nobody gives up real life for a few hot minutes in a bamboo forest.

When Rand braves his paralyzing fear of flying, his relationship with his parents, and his beloved business to respond to a call for help from Kai’s brother and sister, both men have to re-revaluate what it means to be family – and who’d make it worth it to come out.

Excerpt from Cowboys Don’t Come Out

By now the place was jumping. People had been squeezing into the cracks ever since they arrived, and the music clearly signaled dancing time. Couples bopped out onto the floor and the Texas two-step, Hawaiian style, began.

Rand slugged back a mouthful of beer. “You wanna?”

She was out of the booth and onto the floor in record time. Apparently she didn’t get enough dancing. She’s come to the right place. Dancing R Us. He took her in the semiclose two-step hold and set off onto the floor.

After a couple of twirls and close-hold side-by-sides, she grinned up at him. “You really can dance.”

“As advertised.” That might be the only thing about him that was.

A few people had come to the edge of the dance floor and were clapping Rand and Julie on. Rand released his inner exhibitionist and put on a little show. Julie had no problem keeping up. Suddenly a loud whistle cut through the music, and someone yelled, “Go Kai!”

Rand looked around and saw a guy dancing with a pretty redhead. Whoa. Maybe he should say a pretty guy dancing with a redhead—tallish, lean, with caramel skin that glowed in the soft light, and below-the-ear-length black hair that swayed under his cowboy hat as he danced. And shit, could that guy dance. Graceful, sure-footed, and sexy. Holy hell.

“What?” Julie grinned at him. Damn, he’d stopped dancing to watch. “Oh, hell no.”

The band segued into something far more up-tempo and fiddle-based. Most of the dancers gave up, but not the beautiful guy. He just stepped it up and out, twirling his partner across the floor. Rand took up the gauntlet, adding in some line-dance steps. Julie picked it up fast, and they held their own. Rand glanced at the other couple and got a stare from Mr. Gorgeous, who filled out his jeans like sin in blue denim, his ass rounding the back and worn fabric cupping his package in front. Stop looking, asshole, before you get a very embarrassing boner.