An amateur chef, a hard-driving agent, and an androgynous supermodel – food of love or a recipe for disaster?

Hi and welcome! I’m delighted to unveil the new cover for GENETIC CELEBRITY, book 4 in the Genetic Attraction series. The cover was done by the great Lex Valentine! All of these books stand alone, so if you love the cover (like I do) feel free to start with this book.

You can preorder now on Amazon and it will go into KU on release day, March 17th. 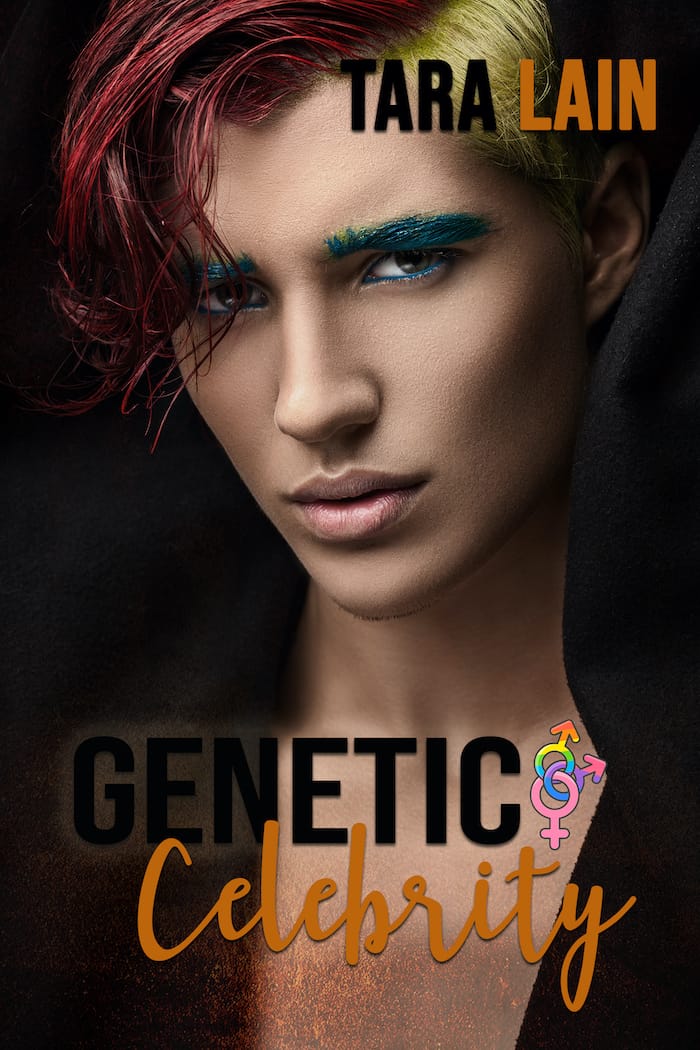 Tommy Riley loves cooking and the simple life. But his passion for Angie “Booky” Edelson is anything but simple. Beautiful, ambitious, hard-driving and 10 years older than Tommy, Booky represents all the things Tommy has tried to leave behind. Besides, she only seems to love him for his food! Then Tommy’s boss brings home Shay Shaleen, a pierced, tattooed, androgynous street kid for Booky to turn into a top male model. Tommy sizzles for the beautiful guy but Shay gets caught up in the flattery of a famous fashion designer. Why does Tommy have to fall for two people who can’t love him back? Is there a recipe for blending with genetic celebrities?

“Oh God, yes!” Her mouth opened wider and stretched…around his wooden spoon. Her pretty red lips pursed just a bit, and he caught a glimpse of the tip of her tongue. Was he a pervert for wishing those lips were stretched around other parts of him? Hell, the age difference wasn’t that great. Ten years. Big deal. Roan, his boss, was thirteen years younger than his wife, Em.

Booky collapsed against the granite counter, clutching her chest. “I think you make this even better than Roan, darling. And I don’t say that easily.”

He rinsed the spoon in the stainless steel sink. “So stay and have some with me. Roan’s supposed to come later.”

“Do I dare? That will be the third time this month I’ve missed Mama’s family dinner. She’ll kill me and ask questions later.”

He fished into the steaming pan and grabbed a sliver of chicken. Okay, try to resist. Slowly he walked toward her, step by step, waving the piece of meat in his fingers. “Chicken cacciatooooooore. Peppers, onions, tomatoes. Mmmmmmm.”

She squeezed against the counter, fending him off. “Tommy ‘Tick Tock’ Riley. You’re a home wrecker.”

She pressed her arm against her forehead. Booky did drama like nobody else. “Oh God, I love capers.”

“Lots of capers.” He stood in front of her. They were practically eye to eye. It would be nice to tower over her, flex his big alpha-male muscles and watch her swoon. Too bad it wasn’t gonna happen in this life. Five feet eight and his cooking were all he had, so he’d better use them. He wafted the morsel under her nose. “Smelllll the goodness.”

She followed the movement with her nose like a hypnotized cobra. “Oh, poor Mama.” Snap. She grabbed the chicken in her teeth and chewed. Eyes closed, moaning. Hell, he’d like to elicit that reaction with other pleasures.

The big brown eyes opened. “She’s going to forget what I look like. I’m such a bad daughter.” Dramatic pause. “I’ll call her and say I’m eating with you tonight. Again!”

Still chewing, she walked around the island counter that separated the kitchen from the huge open space of the loft. She grabbed her purse from the sectional couch and fished out a phone. He got a wink as she dialed.

It wasn’t likely anyone would ever forget what Booky Edelson looked like. Her gleaming black hair fell to her shoulders like a curtain of ebony, and the liquid brown eyes peered out from under straight bangs. Bold features, they called them. A long straight nose and full lips. She was slim but curvy with generous breasts and a round butt. Yeah, if you saw her, you never forgot her. And the in-your-face appearance matched a personality just as big.

Why did he adore her? She was everything he said he was tired of and didn’t want to be. Aggressive, ambitious, pushy. Just like his parents. Plus, even though he’d always liked women too, he’d pretty much been with men since he was sixteen. His family really hated that. He sighed. It didn’t matter anyway because she only loved him for his food.

She looked up at him. “Yes, Tick Tock is here.”

She didn’t say anything for seconds, but she looked like she was trying to get a word in. Mouth open, closed. Open.

She shifted and actually seemed to cringe. Booky cringing? Her mama was a force.

“Mama, I have to work.” She listened. He could hear her mother’s voice squawking out of the cell phone. “I’ll see you next week. Bye, Mama.”

She clicked off. “See what you did?” She adopted her best Jewish-mother voice and struck a pose. “So what would a daughter of mine want to be eating with her ‘just friend’ instead of coming home for dinner where she might get herself a makher for a boyfriend?”

“It kind of is, but it means a person who makes things happen. A mover and shaker. Mama has this doctor she’s been trying to fix me up with for weeks. I keep escaping. She’s pissed.” She bounded around the island. “Okay, I’ll make the salad.”

She rinsed the lettuce and stuck it in the lettuce dryer. “Mama doesn’t mind me hanging with you. She just wants me spending more time with a good Jewish doctor with marriage on his mind.”

A doctor who was thirty-seven instead of twenty-five. A mover and shaker. Just like everyone always wanted him to be. Shit. “Why are you resisting? Don’t you want to get married?”

She stopped ripping lettuce and cocked her head. “I’ve been married.” She shrugged. “You know, I kind of think I want something I’ve never had. Something not written down in Mama’s book of marriage.” She grinned at him. “That’s weird, isn’t it?”

He stashed some plates in the warmer. “No, actually. It makes perfect sense. Just like I’ve always wanted something my family didn’t have written down in their book of success.”