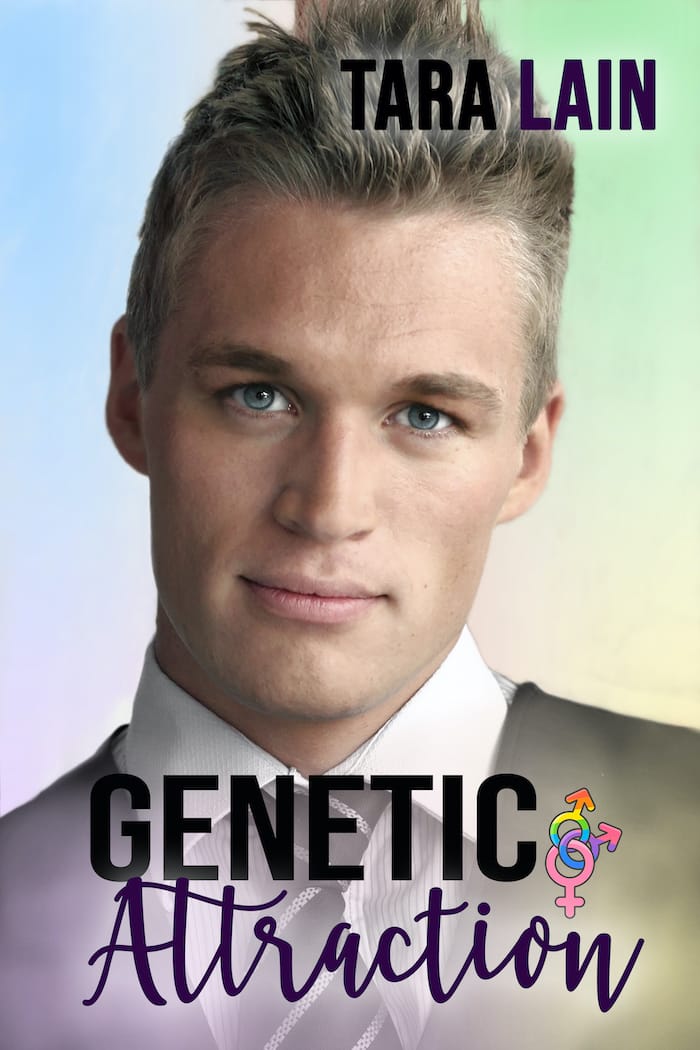 Now for something totally different! . The Hottest Number is 3!

Back in 2011, my first book was published. It’s called GENETIC ATTRACTION, and not only is it a MMF ménage, but also this is the only Tara Lain book out of 52 that has a woman as the primary character. So obviously, if you only read gay romance, this book isn’t for you.

If you read the book back in 2011, it’s not changed much. This is the book that actually continues the story thread introduced in THE SCIENTIST AND THE SUPERMODEL. It tells how the two men get their woman! (But you can obviously read this book first because I wrote it first! )

So, if you like it hot, sexy, and with a lot of love, give my very first book a try.

GENETIC ATTRACTION is now available for preorder and goes into KU on Feb 11. Hope you love it!

At a conservative Long Island university, geneticist Dr. Emmaline Silvay has two great loves — her life-saving work and her younger research associate, Dr. Jake Martin. But Em knows she’s crazy. She’s Jake’s boss and he lives with his girlfriend! When Em discovers that Jake’s “girlfriend” is really his boyfriend, the beautiful supermodel, Roan Black, she resigns herself to a platonic friendship.

But the men have other ideas, and make their intentions clear on a passionate three-way weekend.  Em’s never wanted anything more, but her unconventional love breaks rules her University superiors haven’t even written yet. Roan’s fame makes secrecy impossible and the ménage threatens her carefully constructed world.

They sat in their favorite red, faux-leather booth at the back of the homey restaurant complete with Chianti-bottle candles and red-checked tablecloths. Jake had taken off his leather jacket, leaving him in a soft, gray, tissue-thin sweater that hugged his beautiful lean torso. He’d pushed the sleeves up, and she tried not to stare at those corded golden forearms. The soft material of the sweater was almost as beautiful as his skin.

How did the man afford to dress that way on what she paid him? Never flashy, but even she could see the clothes had quality. He didn’t come from money, but he had just bought a house in what she’d heard was a very elegant neighborhood in Connecticut. Did his girlfriend have money? Damn, the girlfriend certainly had him.

“Am I finally going to meet your girlfriend on Friday?”

He made a quick grab for his water glass and took a sip, splashing a few drops on his glasses. “My girlfriend?”

Why was he being coy? “Yes, the girlfriend you moved in with, right? She must be curious about where you spend so many late nights. I assume you’re going to bring her Friday.”

He pulled his glasses off and wiped them on his napkin, looking tense. What was up? She reached out and flipped his shaggy hair from in front of those blue eyes. The man always needed a haircut, which was another part of his charm.

Oh, hell no. “You’re truly kidding me, Jake. You’ve got to know what that award means to us, to our research, if someone…you know, someone on our team…were to win it.” She didn’t want to spoil the surprise, but she’d hocked a lot of political capital lobbying for him to win the Belden Award. The prize for outstanding young scientist was a big deal to the university too, since all the major research schools from across the country were invited to submit candidates. It’d never occurred to her that he’d just bow out of the ceremony. “Really, Jake, it’s important.”

He glanced at her, and then his pasta got interesting again.

“Jesus, could you be more enthusiastic? You need to come, Jake. And you’ll bring your girlfriend, right? I want to meet her, and it will show the faculty council what a lovely, settled, family person you are. At least one of us isn’t a confirmed bachelor.”

He clenched his jaw and forced words out between his teeth. “Em, I’ll come to the banquet, but I haven’t got a girlfriend. And I sure as fuck can’t show the faculty council my happy family life.”

The girlfriend was gone? “What happened? You told me you just moved in with her.” Damn, she really didn’t want to screw with his life. “Jesus, Jake, is it because I’m working you to death? I’ll talk to her. Give you more time off.”

He held a hand to her lips. “Easy, sweetheart. I’m sorry. I haven’t told you the truth, but I just…crap, I don’t know. I should have told you a long time ago. I just wasn’t sure it would work, it was such a long shot.”

What in hell was he talking about?

She got the first direct stare since they sat down. “Em, I can’t bring my girlfriend to the award dinner…because she’s my boyfriend. The person I moved in with is a man.” He sat back, still gazing at her steadily, challengingly.