Hi. Lucky number 7! The last book in the Balls to the Wall series, Bleu Balls,  is now available on Amazon and in Kindle Unlimited.

This book was a fun challenge to take on since it involves twin brothers, and I wanted to give them both a really happy ever after. Of the two, Robin’s story, he’s the dark, Goth, pessimistic brother, is slightly more emphasized than the romance of Bobby, the sunny blond version of their DNA. But at the center of the story is the fact that the brothers have to switch places in order to eventually have what they both want. Like the two brothers, the book is a bit fun and light and a bit angsty and dark (but you know I never get too dark).

I hope you love BLEU BALLS. 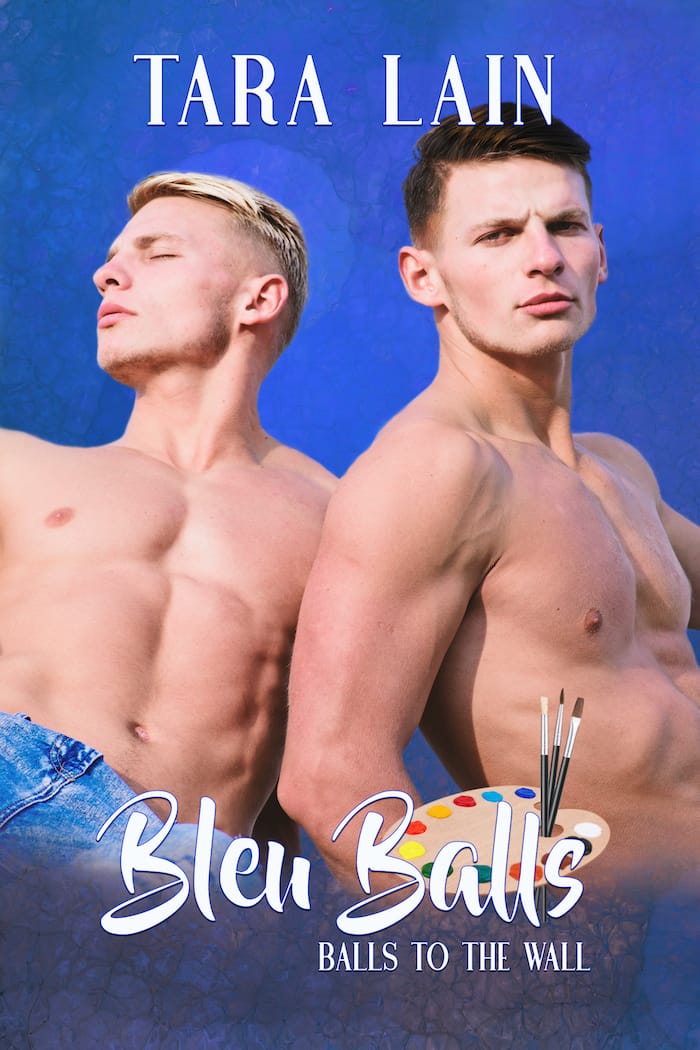 A Balls to the Wall Romance (Book 7)

When are you too grown-up to switch places with your twin?

Goth Robin hates everybody except sunshiny Bobby, the person who shares his identical DNA.

Bobby longs for love, and Robin tries to hand over the guy he wants.

Bobby wants a big contract to paint a mural for a client, and Robin switches places with him, since Robin’s the better painter.

But when their traded identities mix up the men they each want, they’ve got to figure out how to be themselves — and still keep the best of their brother.

Either that or their twin romances can turn into double trouble.

BLEU BALLS is a twin brothers (NO twincest), sunny and dark, switching places, enemies to lovers, secret identity, double trouble, trading partners, MM romance that proves when nobody knows who you are – -that might be the best time for you to find out.

Available at Amazon and KU!

“Poor dear. You do look like you feel awful. Dr. Brown will be right in.” Her head popped out and the door closed.

Good old Dr. Brown had been his and Robin’s doctor for two years. The guy was probably in his seventies, but they both liked that nothing really fazed him. Bobby had even come in when his butthole got irritated after one particularly wild weekend, and Dr. B. had just given him some liquid lavender to drop into a carrier oil. He’d been better in a couple of days and back up to his old tricks. In fact, they both used the lavender mixture now before they had sex. Sex. Jeez, even that didn’t sound good to him, and that never happened.

He flopped over on his side with his legs still hanging off the table and closed his eyes. Death warmed over. Drifting felt good. He needed to get better and call Valerie. Had to know if they got the commission. But not right now.

“Did you die while waiting for me?”

The voice didn’t sound like Dr. B.’s up-from-the-projects drawl at all. Slowly Bobby opened his eyes and caught a glimpse of the prettiest thing he’d ever seen. He sat up fast, got light-headed, and fell back onto the table, closing his eyes against the suddenly blinding light.

“Oh dear.” Two strong hands gripped his feet and slid them up where a table extension magically appeared.

“Sorry. Sat up too fast.” Bobby flopped an arm over his eyes.

“Just lie still.” Deep, warm, and distinctly cultured, like ivy grew all over his voice.

Bobby breathed, then slowly lifted his arm and opened his eyes. “Uh, you’re not Dr. Brown.”

“Ah, but I am.” The man—who couldn’t be more than twentysomething and clearly modeled for Jay-Z in his spare time—grinned, and craterous dimples appeared in what were otherwise lean cheeks. “I’m simply not the Dr. Brown you were expecting.”

Bobby let out a long sigh and sat up. “You sure aren’t.” His gaze clung to that startling face, all shiny skin, short-clipped black hair, and most startling of all, light hazel eyes.

“I’m Micah Brown. The Dr. Brown you were expecting is my father, and he’s cutting back his practice time and letting me take over some of his workload. Hope you don’t mind.” He pulled the afghan down and placed his stethoscope against Bobby’s back. “Breathe.”

Bobby inhaled, coughed, then tried to smile, though every move hurt his head. “Sorry. Just assure me you actually have a license and don’t just play a doctor on TV.”

Bobby inhaled and exhaled, trying desperately not to cough.

“Yep, I’ve got a degree or two and even belong to the AMA.” He hooked the device around his neck and started feeling Bobby’s upper chest with cool, gentle fingers.

Oh my. Earlier, sex hadn’t even interested Bobby. Now? Well, he might make an exception in the case of Dr. Micah Brown. Dear God, the doc was so close, Bobby could lick him. Of course, that might not be covered by his PPO.