Can a guy be too beautiful to be a small-town boy? That’s one of the questions in my new contemporary fantasy, BETTER RED, and I’m so excited to introduce it to you. I started thinking about this series more than a year ago and finally the first story emerged. A too-beautiful boy in a small town, madly in love with a big, quiet mechanic,  but whose doting grandmother has big plans for him, who comes face to face with the big bad Wolfe. LOL. Sound familiar? Despite it’s fantasy elements, BETTER RED is a contemporary romance. It takes place in Ever After, New York, where every story just happens to bear a striking similarity to a fairy tale.

I hope you love BETTER RED. You can buy it on Amazon and read it for FREE in KU!

On Saturday, April 18th, we’re celebrating the release of BETTER RED with a big party at my Reader’s Group, HEA, Magic and Beautiful Boys. There will be 18 fantastic authors chatting and giving away prizes, so be sure to join in. Come over and join the Group so you can join the Happily in Ever After Party. 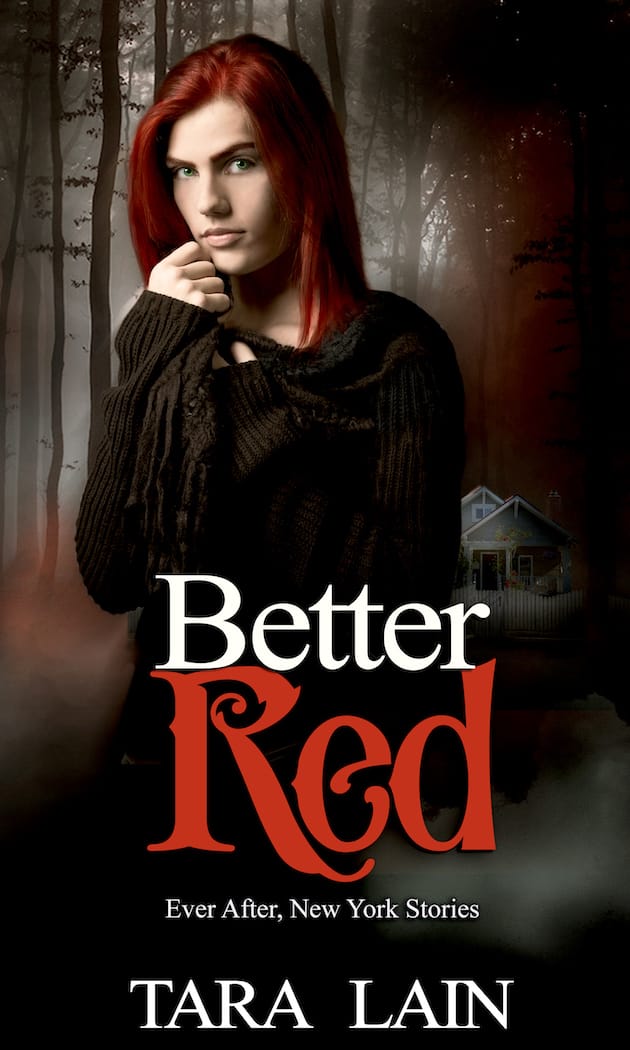 A cup of steaming tea perched on the table by his favorite end of the couch. He sat and curled his legs up, then picked up his tea mug and cradled it in his hands. He wasn’t cold, but the warmth was comforting.

Gran had set her laptop aside and was leafing through a magazine, probably because she thought he’d feel more comfortable if all her attention wasn’t on him. She was right.

She gave him a casual smile. “So how were Mark’s books?”

For a second, Red felt like he might be violating attorney-client privilege if he told her, but he doubted if bookkeepers had the same restraints, plus he wasn’t a bookkeeper. “Good and bad. Good because he and his employees all keep meticulous work orders. Bad because Mark doesn’t have enough time to do his entries, so his accounting is way behind.” He sipped tea, then rounded his mouth and sucked air because it was hot.

“No. It’ll cool.” He stared at the tea. “I’m going back over tomorrow to finish up this round and get him caught up.”

“You work tomorrow night, don’t you?”

She flipped a page and nodded with only secondary interest, even though he could feel her laser focus under the laid-back attention.

Might as well confess. “Mark’s going to come and get me.”

“That’s nice of him.” Another page got flipped.

“He’s taking me to breakfast.”

Finally, she looked up with those smart eyes. “Ah, so we finally get to the source of the smile, I think.”

He fought a grin and failed miserably.

She said, “Am I correct in thinking that you like Mr. Woods?”

He stared at his feet but nodded.

“This isn’t just hero worship because he fought for you and saved you from those awful boys?”

Red shook his head. “No, uh, I liked him before that.”

“So that would suggest that you’re—” She paused and raised her eyebrows.

“Gay. Yes, I’m pretty sure.” He glanced up, met her eyes, then looked down again. “It’s not that I’ve ever done anything with a guy or anything. It’s more of a suspicion. I mean, I don’t really like girls in that way.”

“You did?” He really looked at her that time.

“Um-hm.” She smiled softly. “Somewhere around thirteen, I started observing a lack of girl craziness. For a bit, I thought Kimmie might be the one—”

Gran chuckled. “Yes, well I finally understood that and then started to assume you might prefer boys.” She raised her brows as she sipped tea. “I must confess, I’ve worried a little when I haven’t seen any evidence of a boyfriend. I hope you never thought that I’d be, uh, disapproving.”

“Darling, me objecting to you being gay would be like you disapproving of me being old—a fruitless and silly endeavor.”

He finally returned her smile. “But you’re not old.”

“Well, we’ll agree to disagree on that one.” She put a hand against her chest, a gesture she seemed to do a lot these days.

He let out a long breath. “I never really got that I was gay. I mean, I think I kind of fought it.”

“I can understand that the world makes it very hard to be gay. But it’s getting better.”

Red shook his head. “It’s not that exactly. I guess I never wanted to confirm all the crap, excuse me, ma’am, everyone assumes when they look at me.” He glanced up through his lashes. “I think I kept hoping I’d wake up one day and be this macho man, super athlete, or something and everyone would go, ‘Who’d have thought Red Ridley was such a badass?’” He couldn’t help the sigh. “Instead, I turned out to be exactly what turds like Phil Gordat say I am. But as you say, there’s nothing I can do about it.” The last part he expelled on a long breath.

“Redmond Byron Ridley!” Gran leaned forward and frowned at him ferociously. “Do not be questioning or disputing the gifts of creation. You’re an intelligent, hard-working, devoted man. The fact that there are narrow-minded, bigoted ne’er-do-wells out there doesn’t change the fact that you’re entirely, uh, badass just as you are.”

Red first gaped and then snorted at her choice of words. “Thank you, Gran.”

Red plastered on a tight smile and nodded, but no matter how much he’d like to believe that, he didn’t. The look on Phil’s face when he grabbed Red and tried to rip off his jeans hadn’t said a damned word about jealousy. Sharing those details with his grandmother wasn’t going to happen.