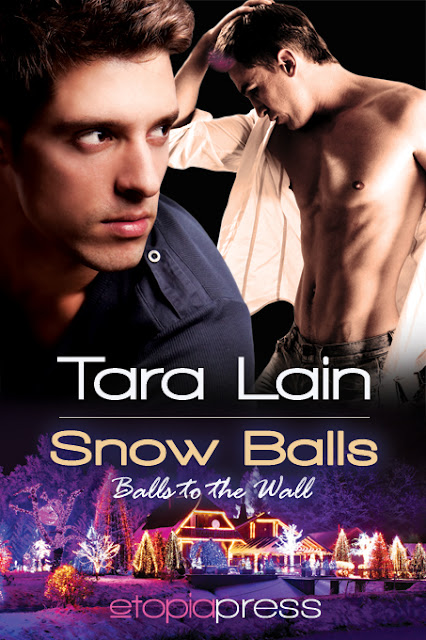 Hi everyone–
Snow Balls, the new book in the Balls to the Wall series, is coming in a week! This story turns out to be a  great favorite of mine. Just to get a little saliva going, here’s a sexy excerpt to pique your interest.

Excerpt Adult:  SNOW BALLS by Tara Lain; MM romance– The Cop and the Creampuff
Available December 7th from Amazon  ARe
Big, handsome and hunky, JJ LaRousse looks like an alpha male but acts like an interior decorator. And he’s trying to be happy about it — until a robbery at the famous Laguna Winter Fantasy brings JJ face-to-face with tough cop, Ryan Star. JJ hears Ryan likes guys who are manly men, so he drops his voice an octave, colors over his pink hair, and tries to pass as a football fan. Ryan Star may be tough but he hides in the closet at work since he learned in New York that being a gay cop can cost you your life. His attraction to that big, handsome kid threatens his anonymity, but he can’t seem to resist. JJ is just his type. But then JJ goes skiing and comes face to face with his greatest nemesis– and all the secrets come out of the closet. Can Ryan love JJ for who he really is? More important, can JJ?
They were traveling at a good speed when Ryan pulled over to the second to the right lane. Odd for the speed demon. Ryan looked at JJ and then brought his hand across the console, found JJ’s zipper and, in one pull, had the whole thing down. Holy…before JJ could catch his breath, Ryan had dug into his fly, loosed the beast from its underwear cage, and was pumping JJ’s cock like he was giving it CPR. And he was, baby, because that hand could save a man’s life.
“Holy crap!” JJ threw his head back against the seat and tried to breathe. Hard and steady, the pumping action shot juice into his balls and straight up JJ’s spine.
Ryan chuckled and whispered in his growly voice, “You like that, big guy? Sometimes you just have to be creative to get what you want.”
That tricky devil. Choosing the lane where they could go slow and not have to deal with so much traffic. Of course, trucks would get an eyeful, but what the hell? Oh God, it felt so good. But no way was he getting all the goodies. JJ reached over an arm and unzipped Ryan.
The cop looked down with wide eyes. “You figure I have driving control of steel?”
“I trust you.” He stuck a hand inside and, holy moly… “You’re commando!”
“Yeah. I don’t like underwear much.”
“I’m not complaining.” JJ grabbed a nice, thick penis. “You’re packin’ there, detective.”
“Always prepared—holy shit!”
JJ grinned. He had big, strong hands and one was wrapped tight around Ryan’s rod. Stroke and stroke. The guy’s eyes widened, but he kept staring at the road. JJ watched his own hand pumping Ryan’s thick cock, then looked down into his lap where Ryan was starting a bonfire with JJ’s wood. This had to be the sexiest thing he’d ever seen. Probably the dumbest too, but right now he could care less. Driving down the freeway doing a double jerk-off. The smell of sex filled the car and went straight to JJ’s head. His hips danced under Ryan’s hand like they had their own mind.
Ryan made funny little noises. “Hunh, hunh.” But he kept his eyes glued to the freeway like it was his path in life. “Hunh, hunh.” His breath came faster and his hand in JJ’s lap pumped harder.
A big semi whizzed past in the right hand lane and JJ looked up at the driver. But the guy didn’t turn his head. Might have been fun if he had. Ryan’s hips pumped up just as much as his foot on the gas would allow. JJ didn’t have any such restriction and he was bobbing and weaving while lightning bolts of pleasure flashed through his cock with every stroke of Ryan’s hand.
Ryan took his hand off JJ’s cock and grabbed JJ’s pumping hand. “Hold on. Go slow or I’ll come and that could be very bad for my driving record.”
“OK.” JJ barely got the words out because Ryan’s hand was back on his cock.
“Just let me take care of you, big guy. It’s fun for me.”
“I think it’s way more fun for me.”
**************
I hope that was good for you!  LOL. Thank you for coming by. We’ll have a bunch of prizes being given away for this new release. I’ll be at several blogs and doing a bunch of blog hops and parties. It will all be posted right HERE in one week. Meanwhile, for the first of the prizes, come over to my Author Blog on Dec 1-7th and enter to win a $100 GC plus many more prizes in the Once Upon a Blog Hop! And subscribe to my newsletter to be included in all the announcements of the events (upper right hand column on this blog). Talk soon! : )