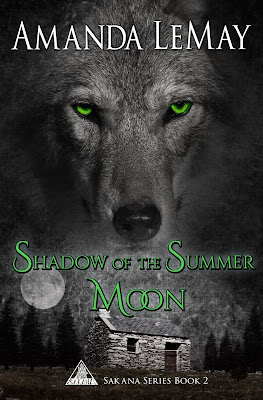 Branded by my pack Alpha.

Betrayed by my mother.

Raised by lies and falsehoods.

The betrayal just as twisted and hideous as the deep scars I now carry.

I have one choice: let my wolf loose and run. Run for my life and to the only other wolf who escaped the San Francisco pack.

I leave my past and my pack behind, hoping for protection, a new home, a new pack and a chance to live free. The last thing I ever dream of finding is a mate.

But falling into Gunner Bodolf’s arms is as simple as breathing in his irresistible scent. And once he kisses me, I can’t walk away. Having been lied to my entire life, there is so much I don’t know about being a wolf. I certainly know nothing of the sakana bond, a rare and precious bond between two wolves, connecting their minds, bodies, and souls.

Gunner and I now share this priceless ancient gift.

I ran from hell and ended up in heaven. Unfortunately, the deadly danger I left behind tracks me across the country to the middle of nowhere, Texas.

My past will never let me go without a challenge, a challenge I refuse to run from. To protect my new life, my new pack, my new mate, I will fight.

Kiss of the Winter Moon
Bk #1

About The Author
Indie author Amanda LeMay grew up on a small farm in Southern California reading every sci-fi book her dad passed on to her and watching every classic horror movie her mom shared with her. Her love for paranormal romance was an easy leap. Amanda published her first paranormal romance – full of dark sexy wolf-shifters called KISS OF THE WINTER MOON – in February 2018. Her wolf-shifters share a rare and special bond with their mates: the sakana bond, a rare and ancient bond that links their minds, bodies, and souls.
Amanda still lives in Southern California with her own Alpha-male husband and two grumpy cats and dreams of living on the beach in Texas. When she isn’t writing, or thinking about writing, (or plotting, or characters, or dialogue, or world building), she’s probably working on any number of crafts, sewing, gardening, or lost in another authors’ wonderful dream world. She plots most of her novels while walking, or driving, or while on long Texas beach vacations sitting outside listening to the waves. She loves reading paranormal romance, fantasy romance, sci-fi romance, contemporary romance…well, just romance in general.
Her second novel in the Sakana Series, SHADOW OF THE SUMMER MOON, is set to go live on June 26, 2018.
Book trivia –
“While on a road trip from Southern California to Texas, about an hour outside of San Antonio we passed through a little town called Comfort. I’d already been in the process of writing a wolf-shifter story, so naturally, I pictured an entire pack hiding in plain sight in the middle of this blink-and-miss it town. I spent the next 2 weeks plotting out a story that became the first book in the Sakana Series, Kiss of the Winter Moon. Where I had planned on another book taking second place, Shadow of the Summer Moon soon took its spot as the result of story hijacking by my beta reader, Janna. She’d dreamed Gunner Bodolf, the Comfort pack Alpha, met his sakana and her name was ‘Simone’. She gave me a few details and I took them, added a little over 126,000 other words and gave Gunner his happily ever after.”
Visit Amanda’s website at www.amandalemay.com and sign up for her newsletter to receive exclusive cover reveals and chapter previews.
Connect with Amanda at
Website | Facebook | Twitter | Pinterest | Goodreads
Giveaway
a Rafflecopter giveaway