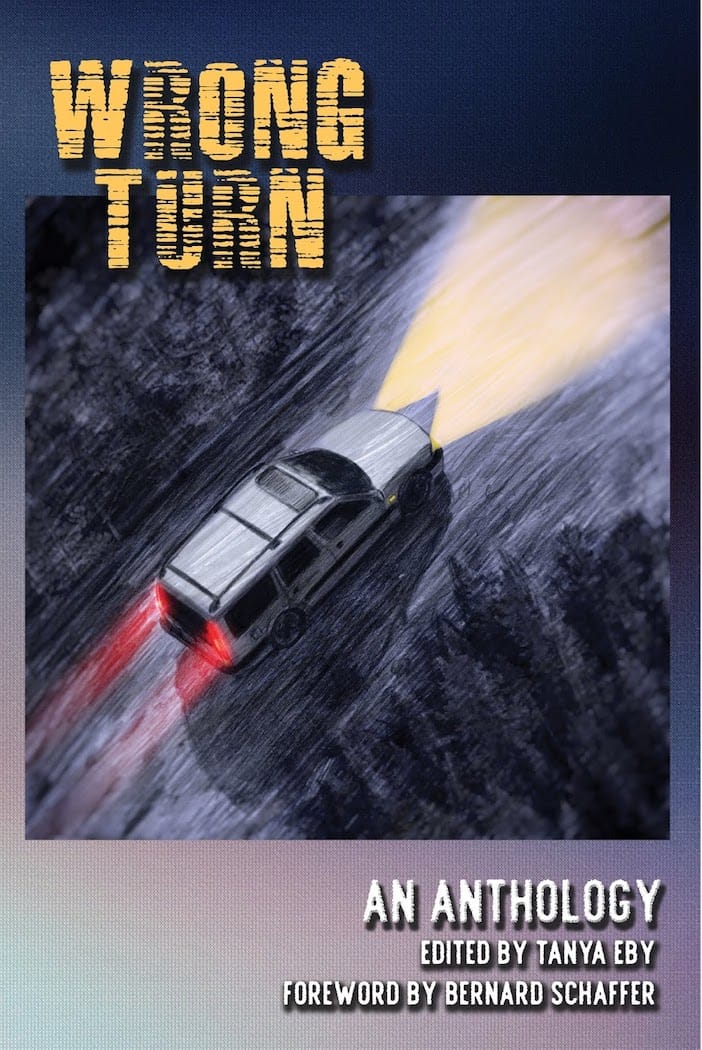 If you like thrillers and/or mysteries, I got something for you!!

An anthology of stories to thrill and chill. Written by 22 authors. Narrated by 22 performers.  Coming to audio, ebook, and paperback on Nov. 15, 2018!

You’re tired. Not thinking straight. It’s the worst time of all for you to make decisions, and maybe that’s why you take a…WRONG  TURN.

In this new anthology offered by Blunder Woman Productions, you’ll take a trip down twisty roads into forests, back alleys, and even across the border between life and death. Together these tales are funny, creepy, weird, contemplative, traditional, and speculative. This is a perfect collection for dark nights when the wind is howling and you’re curled up in front of a crackling fire, or listening to while you’re taking a long walk.  The characters in these stories might take a wrong turn, but it’s the right move for any fan of thrillers and mysteries.

A wrong turn right into the past.

An investigator looks into the reported suicide of his best friend, why it happened, what went wrong and if, in the end, it really was a suicide.

BEWARE THE SLUAGH
By Heidi Hunter
Performed by Sarah Mollo-Christensen

A wrong turn takes a couple to a ghost town haunted by an entity more terrifying than the resident spirits.

When Jehovah’s Witnesses, Valerie and Ana, finally find someone at home, the young women tells them the reason why everything is so quiet on her street…but shouldn’t they already know this?

When a daughter loses her way, a father’s worst fears are brought to light.

Finally forced to choose between obligations or obsession, Charles makes his decision.

Glowing bright fireflies are a delight at night; but a green and blue luminescent fairy with dragonfly wings is a sight to enrapture and capture.

A young woman, dissatisfied with love and life in modern times, comes face to face with the flesh and blood incarnation of all her romanticized notions of days gone by. But are things as they seem?

Most people just want to make it through their day, but Christopher Joseph Brent wakes up every day hoping some disaster will strike so that he won’t even have to see the sun rise tomorrow.

HOODOOS IN THE TWILIGHT
By Robb White
Performed by Tim Campbell

Four friends, recent college graduates, are traveling through Utah’s canyon country on their way to tech jobs in California when their lives are changed forever—and only one of them knows exactly what happened in those missing twenty-four hours.

HOT UNDER THE COLLAR
Written and performed by JOHNNY HELLER

A noir tale about a guy who makes a wrong turn on a hot New York day and finds some hapless thugs, a kidnapped pooch, a dame and a new purpose.

ON A DARK, RAINY NIGHT
By Sharon Hart Addy
Performed by Andrea Emmes

Picking Josh up after his mom’s car broke through the barrier and ended up in the river that dark, rainy night was natural, but what happened afterward was anything but.

OUT OF SIGHT, OUT OF MIND
by Chris Rodriguez
Performed by Chris Cuilla

A package thief prompts a San Francisco mom to dust off some skills from her old career.

It’s okay if you’ve never been in love before, because CareKeion cares about you.

Dumping a body in the lake was supposed to be easy, but, it turns out,  for Shane and Kevin, some favors are harder than others.

When Arnold and his mistress sneak away to their hidden love nest, they have more to fear than an approaching blizzard . . .

Blindly following the satnav leads to more trouble than just a congestion charge when a family is caught up in a spreading wave of terror.

WHAT HAPPENED TO MATHWIG
By Tom Mead
Performed by Gary Furlong

A respectable psychiatrist finds himself roped into a murder plot, but as events spiral out of control he begins to wonder if somewhere along the line he has taken a wrong turn.

A recluse mystery writer commits suicide, but is everything as it seems?