Excerpt & Giveaway: Dance of the Hunter’s Moon by Amanda LeMay

Even though we’d taken on the rules of “human” society, behind closed doors and in our own environments, we were animals and lived by pack law. 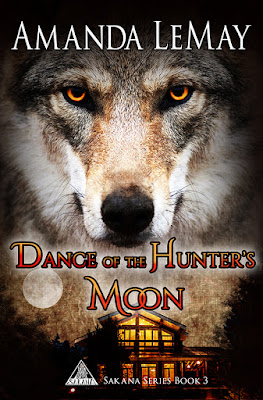 Jules Havarr is a Breeder. For her, it’s a problem. Smaller than other wolves, she grew up feeling inferior to her pack mates. It didn’t help that males tended to avoid her, or looked down on her as though she were unworthy of attention. When a visiting Breeder extends an invitation to breed, Jules accepts his offer, even though it means leaving her home, friends, family, and pack behind.

Breeding at the Moon Dance is an honor she can’t refuse.

That is, until the moment she meets Sorin Campion, and a rare and ancient bond binds them together. She knows it in her heart, feels it deep in her soul. This male is her sakana, and she’s all in.

The only problem? The Breeder whose invitation she recently accepted is Sorin’s twin brother.

Sorin is a dead wolf walking. He’s suffered tragedy and heartbreak that left a lasting reminder of all he’s lost burned into his flesh. He’s lived the past few decades barely existing.

Can the sakana bond he shares with Jules awaken him from his misery, and bring purpose and hope back into his lonely life?

While exploring their love for one another, Sorin and Jules are tested by a dangerous ongoing threat to their pack. A dark and vengeful enemy may tear them, and their new found happiness, apart.

Pre-order your copy at
Kindle | Nook | Kobo | iTunes
Release Date:
November 13, 2018
Excerpt
Before Sorin, I’d never had a boyfriend. I’d never been in
love. I’d never even been kissed.
If he’d taken the chance to save Aliza, we wouldn’t be
spending one second in each other’s arms, enjoying anything as simple as the
rain, the far-away flashes of lightning and rumble of intermittent thunder.
Because of our ancient, unbreakable bond, what we shared was
more than a simple, physical connection. Making love was more than an act of
giving and receiving pleasure. Every touch, every kiss, every smile he gave me,
healed something inside of me, and slowly but surely erased every negative
thought I’d held so close to my heart that kept me from being all I could be.
I’d lived my life convinced I was inferior to the members of my pack, a runt
with no purpose or place, and no amount of praise or encouragement from those
who loved me could make me believe otherwise.
All that changed the second I met Sorin.
My mate.
My sakana.
My broken warrior.
Through our connection, I knew I wasn’t the only one
healing. The pain he had lived through for so long was something I wouldn’t
wish on anyone.
I made him smile. I made him laugh. I made him want to live again.
More than anything, whatever I gave to him that helped heal
his broken heart, he gave back to me, and so much more.
I loved this male. I loved him so deeply, so purely, if
something happened to him, if he were to die…I wouldn’t be as strong. The pain
of losing him would kill me.
“Sorin…” Warm tears trickled down my face as he turned to
pull me into his arms.
He whispered against my lips, “You’re tearing my heart out,
beautiful.”
He kissed me, slowly at first with soft, full lips, then
deeply, with long, dragging sweeps of his tongue against mine.
I wrapped my arms around his neck and held on as his mouth
moved from my lips to my neck, trailing kisses all the way to my mating mark.
“Love you, Juliana. Love you so much.”
Instead of replying, a strangled sob burst from my lungs and
I buried my face in his shoulder.
His teeth grazed my skin. “I think it’s time I take you back
to bed.”
Sniffling, I nodded. “Yes, it is.”
Sakana Series 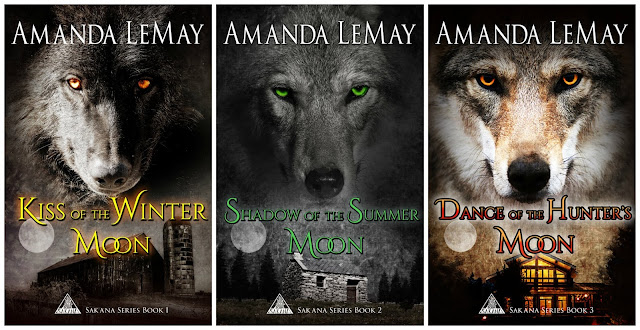 Kiss of the Winter Moon
Bk #1

Shadow of the Summer Moon
Bk #2

About The Author
Indie author Amanda LeMay grew up on a small farm in Southern California reading every sci-fi book her dad passed on to her and watching every classic horror movie her mom shared with her. Her love for paranormal romance was an easy leap. Amanda published her first paranormal romance – full of dark sexy wolf-shifters called KISS OF THE WINTER MOON – in February 2018 – and her second book in the series, SHADOW OF THE SUMMER MOON went live in June 2018. Her wolf-shifters share a rare and special bond with their mates: the sakana bond, a rare and ancient bond that links their minds, bodies, and souls.
Amanda still lives in Southern California with her own Alpha-male husband and two grumpy cats and dreams of living on the beach in Texas. When she isn’t writing, or thinking about writing, (or plotting, or characters, or dialogue, or world building), she’s probably working on any number of crafts, sewing, gardening, or lost in another authors’ wonderful dream world. She plots most of her novels while walking, or driving, or while on long Texas beach vacations sitting outside listening to the waves. She loves reading paranormal romance, fantasy romance, sci-fi romance, contemporary romance…well, just romance in general.
Visit Amanda’s website at www.amandalemay.com and sign up for her newsletter to receive exclusive cover reveals and chapter previews.
Connect with Amanda at