Big Backlist Weekend! ZAM and Me! Ghosts and Beach Hotties! 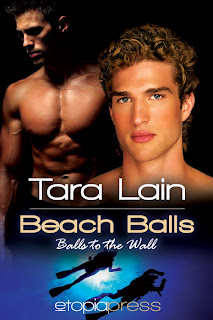 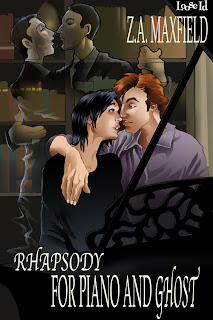 Hi everyone–
Welcome to this month’s Big Backlist Weekend! My guest is Z.A. Maxfield, my good friend and one of my all-time favorite authors. So you can win books my friends! ZAM is giving away Rhapsody for Piano and Ghost (i love this book) and i’m featuring Beach Balls!

Here are the very few rules. If you would like to enter to win either ZAM’s book or mine–

Rhapsody for Piano and Ghost by Z.A. Maxfield ; MM Paranormal (sort of)
Available at Amazon
Fitz Gaffney finally has some breathing room. His mother’s out of town, his piano teachers have backed off, and he gets to spend time at a school where he only has to be adequate for an entire year before all his responsibilities comes crashing back in again. With this freedom comes the realization that he’s lonely, but his first attempt at dating goes horribly awry.
Fitz’s new — but possibly imaginary —  friends, Julian and Serge want to help him find happiness. His used-to-be-stepbrother Ari Scheffield wants to help him gain confidence and a little much-needed cool. His housekeeper Marguerite wants to keep fowl in the back yard for butchering because Duck confit is expensive and she has pillows to re-stuff. And his possible new boyfriend Garrett wants to prove he didn’t mean for their first date to end with Fitz lying unconscious in a Dumpster.
All Fitz wants is someone who cares about him, and suddenly there seems to be a glut. How’s a shy guy to know what’s real when he’s confronted by crazy ghosts, a less than truthful boyfriend, and relatives with hidden motives in Rhapsody For Piano And Ghost.
Excerpt:
“Oh my word.” Julian gripped Serge’s hand in his. He peered into the garbage Dumpster behind the Hart and Hound, the old — and arguably notorious — Anglophile dive. “That’s terrible. Who on earth…? That’s a perfectly lovely Armani jacket!”
“Trust you to be shallow,” Serge muttered.
“Certainly I’m not blind, Serge.” Julian smoothed a hand over the wrinkled fabric, lovingly tracing the sleeve down to the ribbing on the cuff. “I can see that it’s last year’s jacket.”
“I believe I was referring to the boy wearing it.”
“It’s none of our business.” Julian bit his lip. “Do you suppose we can take it?”
“I blame Les Mis. You’ve become a grave robber.”
“There’s ‘more of gravy than of grave’ about this one, though.” He indicated the body that was lying amid a pile of food trash. “Unless I miss my guess entirely, he’s not dead.”
“Then what the hell do you think you’re doing?”
“Give me a hand with this, will you?” Julian had climbed up on a wooden crate and was in the process of trying to tug the jacket off the young man’s body and over the high side of the bin. “It’s heavy, and it smells.”
“He is and he does. I beg you not to lose your humanity entirely. I’m certain at one point you must have had a shred of decency. What else could I have seen in you?”
“Let me think. It was 1924, and when we met, I was doing my famous plantain dance. Long before, I might add, anyone elsedid a banana dance.”
“You’re rewriting history again.”
“I am not. I remember distinctly thinking of bananas and realizing I would need something far more substantial hanging about my waist if I were going to hide my manly charms.”
“Who. The fuck. Are you?” growled a youngish voice from inside the Dumpster. Its owner was clearly the worse for wear.
“Look what you’ve done,” pouted Julian. “You’ve woken it up, and now I’ll never get my jacket.”
“Fine. Take the jacket,” the voice barked. “Just shut the fuck up. My head is killing me.”
Julian leaned over and redoubled his efforts. “There, did you hear that? He wants me to have it.”
“In that case…” Serge stepped up to the edge of the bin in an effort to help. “Although how the word fuck — a perfectly fine old-fashioned expletive — has become the cultural equivalent of shalom, I will simply never understand.”
An enraged face appeared above the blue metal lip like a demented, overly emotional Kilroy. Black hair that couldn’t be natural framed a rather sweet face, striped with guyliner that ran in rivulets down cheeks so smooth they had to be — at best guess — maybe eighteen. A grimy hand with black lacquer on the nails swiped away tears.
“Shalom, little garbage boy.” Julian spoke the last words carefully and clearly, as if the boy were hard of hearing or foreign or both. “And fuck you as well this very fine evening. May I have your jacket, please?”
********************************************************** 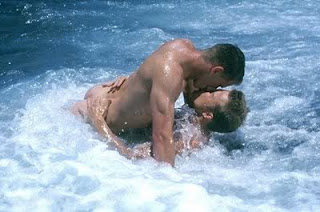 Beach Balls by Tara Lain; MM Contemporary
Available  from Amazon, ARe
Adam James is so far in the closet he could find Narnia. But coming out would threaten all he’s built as the lead attorney for WMA Development, and the million dollars he can get when he finishes pushing  a big land remediation project through the City Council. Then on an early morning scuba dive, Adam meets a tall, lean rebreather diver named Sky who makes him want to live a different life. But Adam’s dreams are shattered when he walks into the council meeting and finds the fire-breathing environmentalist who’s screwing up  his chances of winning is none other than that same beautiful man. Sky Sea Mickeljohn doesn’t compromise, so how could he find himself lusting after a damned developer? And what happens when somebody open’s Adam’s closet door? These two better start telling the truth if they’re ever going to find world peace.
He swam to Sky and extended a hand. Sky shied a little, but Adam kept coming and passed his fingers through Sky’s curls floating freely in the water like an underwater flower. Sky looked up at Adam’s hand.
He touched Sky’s cheek. For a moment, Sky was still.
He pressed his cheek against Adam’s palm.
Oh, yes. That constituted a welcome.
Adam pulled his mouthpiece out and held his breath. He tapped on Sky’s mouthpiece. Sky frowned.
Just kiss me, you idiot. Adam pointed at his mouth, stuck his mouthpiece back in for some air then took it out again. Sky smiled around his mouthpiece, removed it, and leaned toward Adam.
He pressed his lips against Sky’s. Warm and cool at the same time. Sky opened his mouth and licked along Adam’s lips. Nice. Adam turned his head to the side, grabbed a hit of air, and then came back in and pushed his tongue into Sky’s mouth.
A moment later, they pulled away for a breath of air. Adam sank down to his knees. Come to Daddy… He took hold of Sky’s tight shorts and yanked. The big cock was happy to see him. He breathed deeply through his mouthpiece once, twice, three times. Mouthpiece out, cock in.
Oh, yeah. This was easier than kissing. Who knew you could suck and lick while holding your breath?
Sky started bobbing like a crazy man, shoving that cock deeper. Adam took a breath then went back to work running his tongue over the glans as he sucked. The taste of salt and feel of silk filled his mouth. Another breath, then he worked the mushroom head in and out of his lips like a candy pop. His hands began to pump, and he sucked until his cheeks tingled.. Sky’s hips pumped in slow motion, pressing his cock into Adam’s mouth along with the tang of the sea. It gave a whole new meaning to the term “deep throat.” Adam sucked as much as he could without swallowing water and could hear the echoes of Sky “shouting” around his mouthpiece.
Sky’s body began to thrash. One big thrust, and Adam tasted cum and saltwater at the same time. Thick jism floated out of his mouth. Son of a bitch. He had the best of Sky and sea.
*************************************************
There you have it! I hope you enjoyed this month’s Big Backlist Weekend! Be sure and leave a comment with your email! ZAM and i are off to RT! I’ll be reporting back from there. Also, over at Tara Lain Blog, we’re going to be featuring ZAM’s new book, Grime and Punishment, after we get back from RT. So watch for it! Have a great week.