Sinders and Ash and Beauty, Inc. 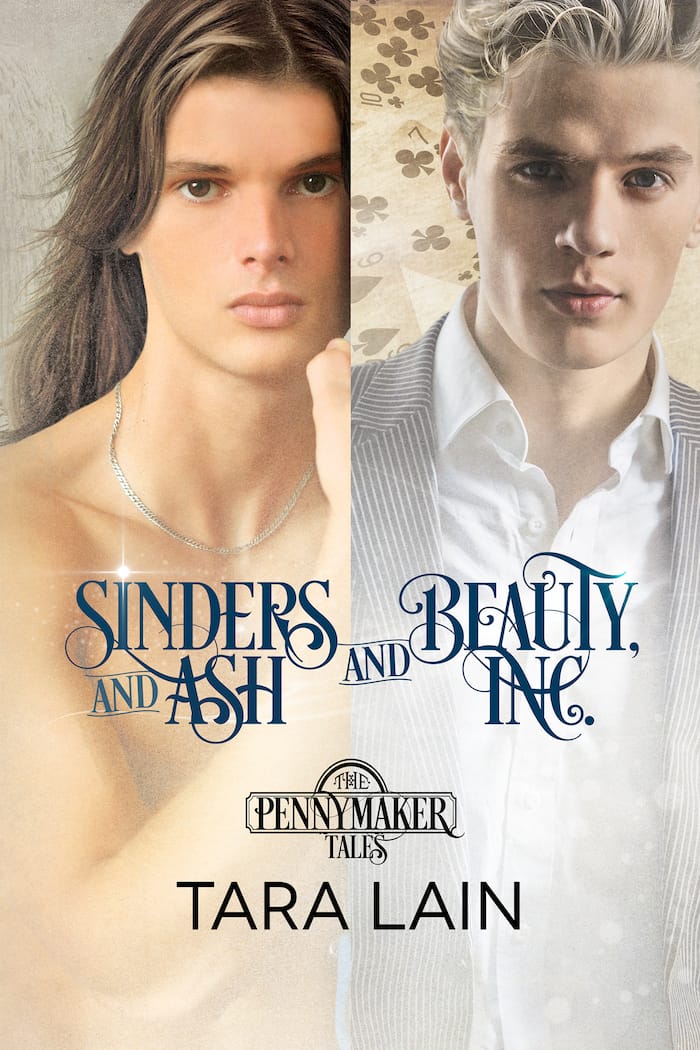 In an upscale resort, housekeeper Mark “Sinders” Sintorella works hard to save money for fashion school, but one look at Ashton Armitage, son of one of the wealthiest men in America, turns his world upside down. Ash is at the hotel to find a wife or lose his inheritance. Though he’s secretly gay, he’s wildly attracted to a beautiful, mysterious girl—not realizing she’s actually Mark wearing his own designs to impress investors of Mr. Pennymaker. When the clock strikes twelve, two beautiful princesses line up for the wedding, but whom will the slipper fit?

Chemist Dr. Robert “Belle” Belleterre dedicates himself to developing a new product to help put his father’s small cosmetics company on the map. Sadly his alcoholic, gambling-addicted father loses Belle in a poker game to Magnus Strong, the CEO of Beauty, Inc.—a man infamous for his scarred ugliness. Belle is uprooted from his home, living in a crazy apartment owned by Mr. Pennymaker, and completely unprepared for his attraction to Strong. Belle fights his passion, but Strong’s scars hide goodness and humility. When Belle’s family starts manipulating his life again, the odds turn against happiness for beautiful Belle and his beloved beast.

The soft knock reminded him of a cue in a bad play. He knew who it was and knew he shouldn’t answer. That insane little man gave him hope when he knew he had no hope. Only hard work. But dammit, he liked Mr. Pennymaker.

He huffed, dragged himself off the bed, cleared the couple of steps to the door, pulled it open, and headed right back to the bed and curled into a ball.

“Helloooo, my boy. How are you this lovely day?” The chirpy voice paused, and Mark peeked at him from his armadillo-like position. Mr. Pennymaker had his hands on his knees and was gazing at Mark. Yes, he was an elf. “Hmm. I gather we are not tip-top?”

“What seems to be the problem?”

“Don’t really want to talk about it.”

He had a point. Mark needed another angle of vision. “I did something very bad.”

The dark suit Pennymaker was wearing today would have been conservative but for the bright pink vest and the gardenia in his buttonhole. He sat on the rickety chair. “Would you like to tell me about it?”

Mark sat up. Would he? There was something about the man. Like he was on Mark’s side no matter what. Mark had never had that feeling… at least not since his mom died. It made no sense. Mr. Pennymaker was a stranger, but there it was. “Well, you see, Richard the Bastard tried to force himself on me, and I was so—”

“Hold on! What happened?”

“Oh, the bastard sous chef finally quit perving on me and decided to do the deed. He didn’t get to hurt me because Armitage—you know, the rich guy—came to my rescue. And now I know I’m going to get fired any minute, and I really need this job, and I don’t know what I’ll do if they give me a bad referral.”

“No, you don’t understand. Because I was really upset. See, I had this thing happen and I guess I went into flashbacks or something, but I was pretty messed up, and Armitage tried to help me and, shit, I kissed him.”

The man grinned. “Kissed him?”

Mr. Pennymaker’s voice dripped with amusement. “I’m sure you were grateful.”

Didn’t he get it? Mark sat up. “No! I kissed him kissed him, like, with tongue and, you know.”

The grin got bigger. “I’m sure you were very grateful.”

Mark sighed. “Maybe. But I imagine he’s reporting it to Marcusi right now and I’ll be out on my ass by tomorrow.”

“Maybe he enjoyed it.”

Hell, he hadn’t thought of that. The guy had seemed shocked, but he hadn’t worked very hard to get away. After all, Mark wasn’t exactly Mighty Joe Young. Still, the look on his face…. “I doubt it. Hell, you can’t do anything good with Sinders and Ash.”

He pushed into the marble and glass room just as Belleterre came out of a stall. He seemed to be taking deep breaths, and his high cheekbones were flushed pink. He saw Magnus and the blush darkened, which was more than any gay man could stand.

Try to look natural. Magnus stepped up to the urinal and hauled it out—clearly a losing proposition, since the mere sight of the guy prompted a half-mast condition. Breathe. You’ve gotta pee or he’ll think you’ve lost it. In through the nose.

Belleterre walked to the sink, pulled some paper towels from the dispenser, wet them under the water, and applied the compress to his cheeks.

Magnus managed a thin stream, shook, and zipped. He walked to the sink beside the beauty called Belle. He contained his smile since he knew it was scary. “You’d think with their prices, they could afford better air conditioning.”

The guy startled, looked at Magnus with wide eyes, then burst out laughing. Clearly symphonies had less melody. “You certainly would. In fact, there’s a lot about this place that could use some investment, I’d say.”

“A man after my own heart.” He extended his now clean hand. “I’m Magnus Strong.”

The guy nodded. “Of course. I’m Robert Belleterre. I expect you know my father.”

“That’s what they call me.”

“I believe you’re also a chemist.”

Magnus nodded. “A long time ago.”

Belle’s lips curved just enough to cause cardiac arrest. “Honored.” He walked out the bathroom door.

Magnus leaned against the sink and took deep inhalations, then managed to get it together enough to return to his table.

Elliott stared at him anxiously. “So? Did you meet the mystery man?”

“Wow. How have they kept that under wraps all these years? Seriously, once that kid’s puss hits the social sites, forget anonymity.”

Magnus pushed his plate aside and leaned in. “I want every detail on their new product. I don’t care who or how much you have to bribe. Just do it. Likewise on Belle Belleterre. What does he like? Hate? What drives him? Get it all for me.”

Magnus stared across the restaurant, where Kleinschmidt’s hand rested on the back of Belle’s chair. Magnus felt his hands clench. “And I want to know what the hell he’s doing with Eric.” He could still feel the tingling in his hand where they’d touched, and the tingling in his cock. He sucked a breath. This is no time for stupid, hopeless infatuations. “Just find out as much as you can as soon as you can.”

“And the game you arranged for me tomorrow night?”

“Yes. All the confirmations are in. It should be great poker and hopefully some great information as well.”

“You know how I said I didn’t want to include Ron Belleterre?”

“Yeah, because he drinks too much.”

“I changed my mind.”

Elliott smiled. “May I ask why?”

Magnus grinned back. “Because he drinks too much.”