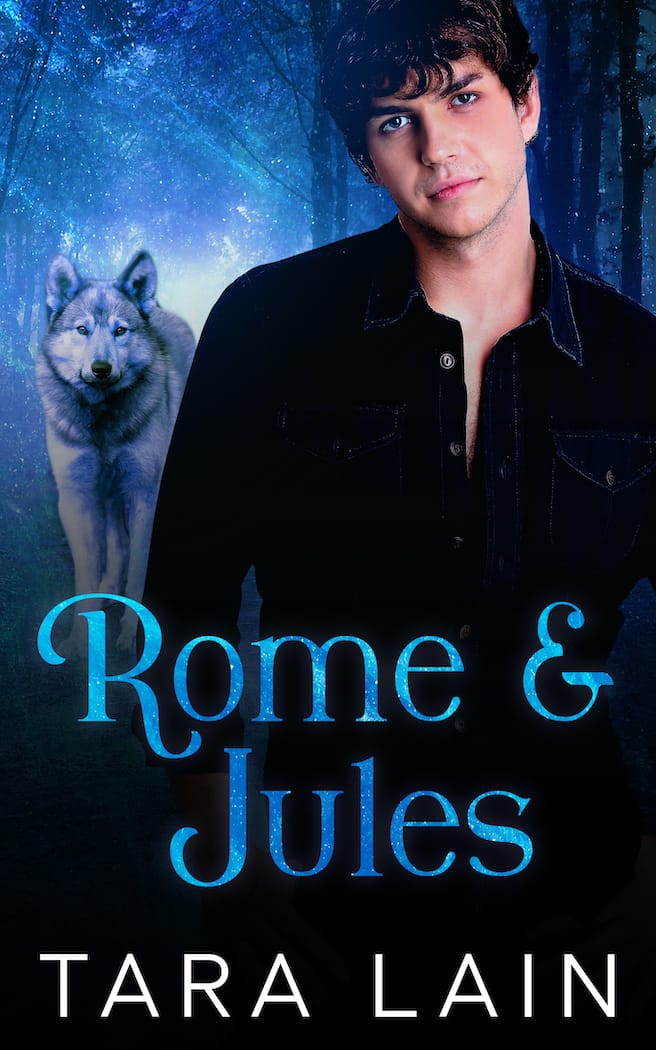 Rome Siracusa wants to be a faithful son and proud member of the Siracusa pack, but he’s got a couple of dangerous secrets – –

He possesses “alpha advantage”, the whispered myth of superiority that shouldn’t fall to youngest sons…

And he’s gay, an invitation to get killed by his homophobic alpha father.

But all his good intentions go up in smoke when he gets one look at Jules Havilland, gay son of his pack’s deadly rivals

Both guys are supposed to be pawned off in “advantageous” marriages, but forget that.

After all, this is a story of star-crossed lovers.

What People Are Saying About Rome and Jules

Rome and Jules had every component that I enjoy in a story: romance, suspense, wonderful writing, and a paranormal twist. The fact that Lain draws upon Shakespeare with such detailed knowledge only adds to the novels appeal, for me, and it is worthy of a 5 star recommendation!

Rome and Jules was a great addition to this series that I thoroughly enjoyed. I feel as if I haven’t said enough about the book but my head is full of these two that I am finding it hard to get exactly what I want out. So I will just end with this quote from the man himself to end this rambling review and sum up my feelings.

“So long as men can breathe, or eyes can see,
So long lives this, and this gives life to thee.” ~Shakespeare

I also enjoyed the writing. It was fluid, fresh, dynamic. I followed the plot easily, and get attached to the characters rapidly. Actually, I loved them so much that I didn’t want to let them go at the end of the book and kind of wish for a sequel.

Excerpt from Rome and Jules

ROME WATCHED the cars full of people in costumes driving by them as he navigated toward the opposite end of Dark Harbor from the Siracusa homes. Havilland House occupied the top of a high ridge looking over the ocean—the most prestigious site in the complex. Built around it down the hill, the homes of the pack members lined the streets, each positioned like a commentary on their standing in the clan.

As they got close to the mansion, Rome said, “I’m going to drive past. Maybe we can see how much checking they’re doing.”

“Yeah. Okay.” Merrick turned his Darth Vader mask toward the window. Rome glanced over but had to keep his eyes on the road in the dense, slow-moving traffic.

They’d taken one of the Siracusas’ infrequently used cars so they were less likely to be spotted. He glanced around like they might be searching for a parking space, his Batman hood covering his well-known features.

Merrick said, “Damn, I just saw one of the guards lift a guy’s mask. They must be checking.”

Rome stared past Merrick. Sure enough, a female in a grand ball gown pulled off her half mask and lifted her face to the light so the guards could see her. The burly dude at the wrought-iron gate stared at her, then checked a tablet. “Jesus, maybe they have photos of all the guests.” He blew out his breath. “They’ll recognize both of us, or if they don’t, they’ll know we’re not on the list. We better give this up.”

“Hell no. I spent fifty bucks on this getup. I’m not leaving.” Merrick crossed his arms.

“How exactly do you plan to make this work?”

Rome gave Merrick a look that did no good since it was hidden by the Dark Knight, so he gave it up and drove two blocks down the hill, found a street with fewer houses, parked in a space between streetlights, and turned to Merrick. “Okay, man, what have you got in mind? I’m not willing to die for this female even if my father wants me to.”

Merrick pressed a hand against his chest in mock horror. “What? You won’t die at the alpha’s word?”

Rome glanced out the windshield at the half moon. “I’ll die for some things, maybe, but not for Rhonda Montgomery.”

“Ah me.” He fell back against his seat, eyes closed. “I’d gladly drown in her double Ds.”

“Have you got a plan for getting in there or not?”

He leaned forward. “As chance would have it, I just happened to encounter the Havilland ward, Buffy, after a night run in the forest.”

“Well, of course I did have to run four miles to catch her before that chance meeting. Nonetheless, she became very interested in my getting into her bedroom and happened to tell me about a rumored passage from the woods through an old underground corridor that the Havilland ancestors used to escape ravening hordes of vicious humans. She didn’t know where it was, but she said she’d read about it in a family diary.”

“Come on. It’s probably just a myth, or if it did exist, it’s long since collapsed.”

“Luke, I am your father. Would I lead you astray?”

Rome barked a laugh. “Are you telling me you know where this corridor is?”

“Yep. I figured if it ever came to war, it’d be useful strategic knowledge, so I went searching and—ta-da!—I found it, man. This is a way better reason to use it than war.” He laughed that raucous Merrick bray. “Come on.”

They slid out of the car and began walking down the road in full view, their costumes concealing them and making them less conspicuous than if they tried to hide. As they came up on the edge of the Havilland mansion grounds, Merrick looked around and paused until a group of costumed guests walked by, then grabbed Rome’s arm and pulled him into the bushes. The game was afoot, as the saying went. Here’s hoping we’re still on our feet by the end of the night.