Return of the Chauffeur’s Son

He always dreamed of the younger brother – and missed the allure of the older one. 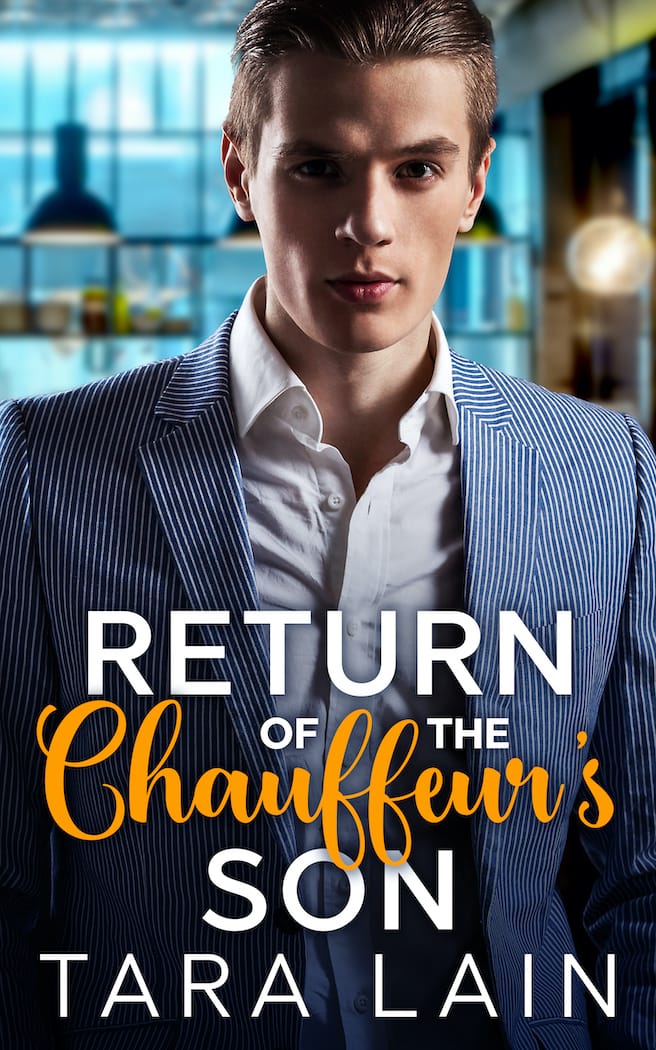 Return of the Chauffeur’s Son

Return of the Chauffeur’s Son is a love triangle, billionaire, rich boy/poor boy, choosing the wrong brother MM romance – with a dash of Audrey.

What if the chauffeur’s child staring at the two wealthy brothers from the tree over the garage – was a boy?

Luca McGrath has one goal — to return to Napa Valley, California, and start his own restaurant and winery,

And he has one dream – his life-long passion for the bad-boy son of a billionaire, James Armstrong.

But while Luca watches James, it’s Dylan, the dark, brilliant, brooding brother who watches him.

Luca’s about to torpedo all Dylan’s plans for increasing the company’s fortune,

And when he does, he’ll break Dylan’s heart.

What People Are Saying About Return of the Chauffeur’s Son

Tara Lain, this may actually be my favorite book of yours so far. Honestly, it is wonderfully written. I practically felt Luca’s heart race upon first meeting Dylan, then his heart drop to his toes when he found out that James was engaged. And don’t get me started on the iconic Conservatory scene! From start to finish, Return of the Chauffeur’s Son was fantastic!

I can’t quite put my finger on the “why” I loved this book so much – but I truly did. The main characters, Luca and Dylan, were just so delicious (food pun, on purpose). Their relationship built throughout the story and seemed to fall in place – just for their worlds to be shaken up. It’s a great HEA fairy-tale, filled with great lovable characters, money and station in life not being a barrier, and the love of family after all.

You can always count on Tara Lain to write a brilliant book. I very highly recommend this story. If you love food and cooking, if you love a prince charming type story, if you love some drama and love triangles and billionaires, then you will love this story

Another great book by Tara Lain. I haven’t read one of her books yet that I haven’t loved. I definitely recommend her books to everybody.

I love Tara Lain’s ability to write a feel good story full of humor, romance and laughs. We get a great group of characters, friends and family. A touch of angst and a pretty wonderful ending. I definitely recommend The Return of the Chauffeur’s Son, especially to fans of Tara Lain.

Wanting to know who would end up with who kept me turning each page. Some of my emotions got a workout too. I wanted to slap one, hug one, cry with another, shoot someone and go out drinking with many of them.

Excerpt from Return of the Chauffeur’s Son

The door from the bottling rooms opened, and a man backed his way through with two other men behind him. He was gesturing and saying something about profit margins. The two in back were older, one kind of distinguished and the other artsy as hell. But the man in front? Wow. Just wow. What shoulders. What an ass. And the legs look like they could squeeze the life out of you and make you happy about it.

The guy backed a little farther, until Luca took two steps so he didn’t get in the way of the dissertation on return on investment and cost-cutting measures not impacting quality.

As Mr. Cute Ass continued to hold forth, one of the older men looked up at Luca, gave him a quick, appreciative once-over, and then grinned as the lead guy kept crowding his space. Finally the older man reached out and grabbed the cute ass’s arm, nodding toward Luca. The guy stopped talking and turned his head, and his body followed.

Dylan Armstrong cocked his head and frowned; then the creases in his forehead smoothed. “Luca? Oh my God, I knew theoretically you’d change, but—well, I guess I just didn’t think far enough.” He stepped in and gave Luca a hug—slightly one-armed, guyish and awkward, but a hug nonetheless.

When Dylan stepped back, Luca smiled. “You’ve changed too. I didn’t recognize you either for a minute.”

Dylan shook his head, those pale green eyes that had always seemed to see more than they should exploring Luca like a microscope. Suddenly he seemed to remember where he was. “Forgive me. Winslow, Anson, this is Luca McGrath—”

“Of course.” The distinguished one who appeared to be Winslow stuck out his hand. “Francis’s son. How wonderful.”

The other one—Anson?—said, “I don’t know how you looked when Dylan last saw you, but I’d call you more than memorable now.” He shook fingertips. Oh yeah, these two are definitely gay. Wonder who they are?

Dylan looked around at the crowd. “How did you get here? Rental car?”

“No. The rental companies were pretty much sold out. I hitched a ride on a tour bus.” Luca’s new friends, who’d been on the bus with him, all glanced his way with interest.

Anson laughed. “How very resourceful of you.”

“They were kind enough to invite me along.” He grinned. “We even stopped at Krug before coming here.”

Dylan laughed. “That’s one way to get reacclimated.”

Looking like Apollo descending from Olympus, James Armstrong burst through the door laughing, then held it for his mom, who laughed also.

Just like I remember—but better. Sandy blond hair, wide brown eyes, tall, lean body, dimples for miles, and sass to spare—the manifestation of Luca’s dreams, waking and sleeping, since the day he’d realized he liked boys thirteen years earlier. Maybe even before that.

Available at Amazon. Now at KU!