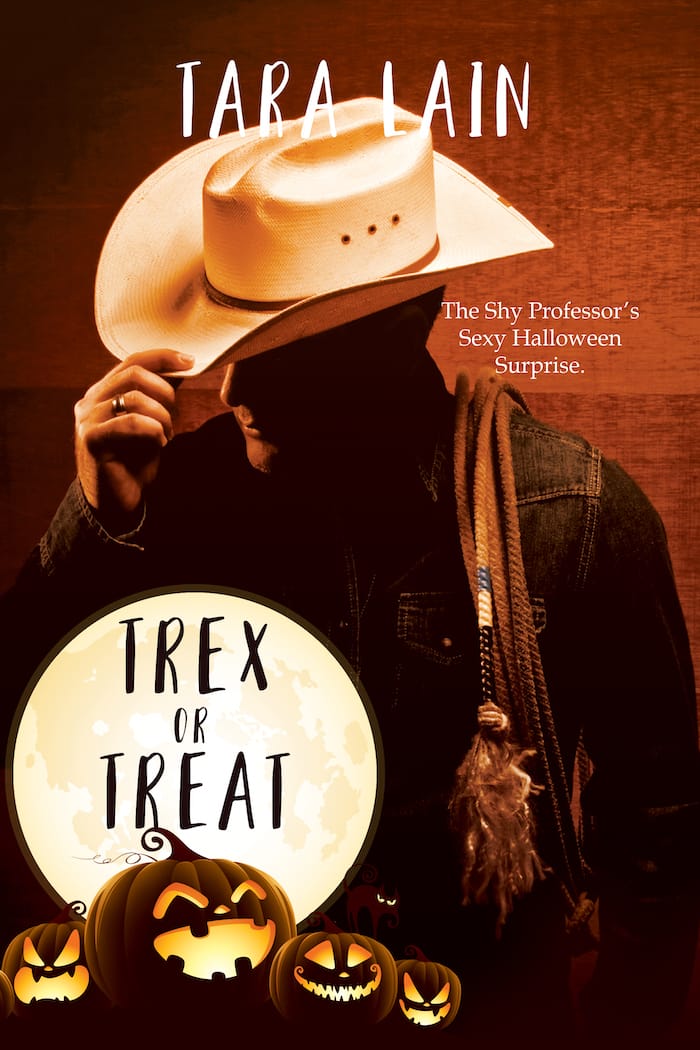 Nominated for Best Contemporary Romance of 2018, this steamy Halloween novella, Trex or Treat, brings together two lonesome cowpokes in a sexy haunted house.

Josh Harris is all dad all the time. A busy college professor and devoted single father, Josh tries to be happy with only his son for company. But then Bradley “Trex” Trexler moves in across the street with his stepbrother, Bogo, and takes advantage of their empty home, making it into a haunted house for Halloween.

Josh’s son, Ernie, can’t wait to go, so Josh dresses up like a movie cowboy and saunters over. It’ll be the best Halloween of Ernie’s life, but there’s another sharpshooter roaming the dark corridors, and this one might have a special treat for Josh….

Nice, private Halloween party for two after the kiddies have gone to bed makes for a funny, cute, sexy, and all around awesome read. I couldn’t get enough, and just wanted more. Short and sweet, and guaranteed to leave you with a smile!

Excerpt from Trex or Treat

A voice drawled, “I’m not sure there’s room for two gunslingers in this town.”

Josh slowly raised his head. Doc Holliday, aka Trex, stood at the other end of the hall. Black hat, dark three-piece suit, a gun at his side, and a delicate handkerchief tinged with blood that was the clue to the character—Holliday had died of TB. The western garb fit perfectly on that tall, athletic body. The real Holliday never looked so good. Josh wanted to drool.

Josh smiled, but Trex didn’t break character, his gaze resting steady and dangerous on Josh’s face. Okay, two could play. Josh scowled like a man who gazed into the sun all day and chewed the stump of cigar in his mouth. He rested a hand on his toy six-shooter. “You want to try me?” The words were out. What did I just say?

Trex/Holliday sauntered toward him, spurs jingling. He came face-to-face with Josh and cracked a hint of a smile. “Show me what you got.”

Trex reached up and slowly took the unlit stogy from Josh’s teeth. He slipped a hand around Josh’s neck and—holy crap!—he pressed a hot mouth over Josh’s lips with a hint of warm tongue. Their hats bumped and Josh’s fell backward. He grabbed for it, their teeth knocked together, their noses squashed, and Trex pulled back, laughing. “I guess we know that cowboys didn’t spontaneously seduce each other. Too much shit to get in the way.”

Josh knew his eyes were wide, and he was having trouble keeping his breath even. “Doing a little cowboy experimentation, are we?” He reached down, grabbed his hat from the floor, and put it back on.

Trex waved a hand down Josh’s body. “Hey, you come in oozing cowboy charisma, you gotta expect some admiration.”

Get Your Free Holiday Giveaway