Six friends find out they’re all with the wrong partners – thanks to a piece of mistletoe. 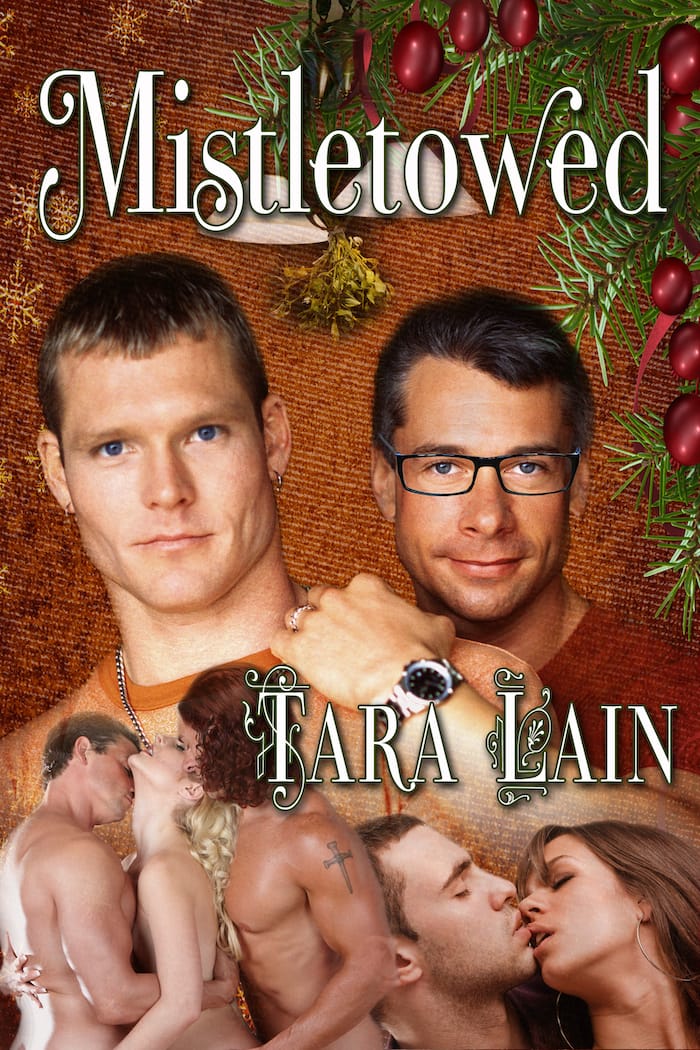 What People Are Saying About Mistletowed

I know there are still a couple of weeks until Christmas 2011, and I have quite a few Holiday reads still sitting in my inbox, but, so far, this has been above and beyond, my favorite holiday read.

To call it a comedy of errors is putting it mildly. All the neat little relationships we see in the beginning aren’t all they’re cracked up to be. Watching them unravel and reform was absolutely delightful. It’s amazing what a little magical mistletoe can do for one’s love life.

I’m not going to ruin it for you, by telling anymore, but I will say that there are MF, MM and MMF elements to this story. So yeah, there are girly bits, but the MM storylines are dominate.

He always felt so comfortable at Jason’s place. Happy and satisfied. Not his usual state of being. Of course, he got off on the pressure and uncertainty of business, but here at Jason’s, he was different. Maybe mathematics had something to do with it. Numbers were unambiguous, unlike marketing.

​He sighed. He couldn’t say why he felt happy here any better than he could say what in the hell he was doing here now at eleven-thirty at night, hanging out on Jason’s porch when the man clearly wasn’t home. Had he expected Jason to be here? Ah, that was the real question. He often dropped in on his best friend. But it was, after all, Thursday, the day that Jase had said he was going out to dinner with some guy. Had Christian actually forgotten that until he got here, like he was telling himself, or…? Oh well, he was here now.

​A car slowed down on the street, and Christian hopped off the swing and slipped around the side of the house. Okay, more self-examination might be required. Still, he didn’t want to barge in on his friend’s date. If Jase and his date went in the house, he’d just leave. But if not, he’d go in and say hi to his friend. Why the hell was he hoping so much for the last option? He heard footsteps and pressed his back against the side of the house, trampling a couple of small bushes in the process. He heard Jason’s voice.

​“Thanks for dinner, Walter. I’ll have to tell my friend who loves to eat about it.” Christian smiled, knowing he was the friend in question.

​The reply was a deeper voice. “Maybe I could have a little dessert?” Shit, Christian wanted to get a look at this guy, but he didn’t dare.

​“I guess that would be possible.” Jase sounded a little flirtatious and a lot nervous, so

​​Christian figured the guy wasn’t talking about banana cream pie.
Things got quiet, and Christian couldn’t help himself. He peeked around the corner. Shit! He slammed back. They were kissing. The guy was a big bruiser, maybe six feet, two hundred. And he was kissing slim, graceful Jason. Oh crap, he didn’t want to see his best friend kiss a guy. Or maybe…

​He peeked again. They were going at it, lips locked, hips pressed together, moaning. Attention! His cock went from limp to ramrod straight in one breath. Just before he saw red. Literally, a field of red washed over his vision. He wanted to kill the guy. Okay, that was a weird reaction, but he couldn’t get his heart to beat more slowly or his respiration to calm.
Then he heard it. Over the moans, he heard sounds of distress. He stared at the embrace and realized that their hips were pressed together, because the bruiser, who had a good forty pounds on Jase, was holding his butt in one big hand. His other hand gripped Jason’s brown shaggy hair so he couldn’t move his head. He was forcing himself on Jason!

​Double shit. Now he was going to kill the guy. Without another thought, he rushed around the side of the house, stepped under the porch rail where he had slipped away so quietly before, and in two steps, had a hand on the guy’s meaty arm. “Get your fucking hands off him.”

​“What the fuck…” The guy pulled back, still holding Jason’s head. Big mistake. Christian reached over and closed his hand over the bruiser’s. The man was heavier, but Christian had a good three inches of height on him, and he had big hands and feet — to match another big appendage, he was pleased to say. He squeezed the man’s hand bones until the guy’s eyes bulged and he frantically tried to pull away.

​“Who the hell are you, some kind of fag hater?”

​Think fast, Christian. “Quite the contrary.” He took a deep breath and channeled his inner queen. “I’m his boyfriend. Sometimes when I’ve been naughty, he likes to make me jealous. So let him go, and I’ll forget the whole thing, since I know my little minx set you up.” Where the hell had that come from? He squeezed the meaty paw harder. “Understand?”

​Christian released him, and the guy pulled away, shaking his bright red hand. He looked at Jase angrily. “Man, I never figured you for a player.”

​Jason tossed his head, throwing his longish hair out of his eyes. The guy had knocked his glasses crooked, and he straightened them with a snap. “And I didn’t take you for an asshole who would force a guy.”

​“I know where you were going.”

​Christian stepped closer to the big man. “And I know you better get the hell out of here and leave Jason alone. Clear?”

​The guy turned, and without another word, walked to his car, got in, and left, shooting venomous looks, but nothing more dangerous.

​Okay, crisis past. Uh, and how exactly was he going to explain being here, but hidden? He glanced at Jase, who instantly voiced the question. “What are you doing here, buddy?”

​“Uh, well, I just wanted to hang out, and I kind of forgot it was Thursday, but then I remembered, and I was just thinking of leaving when you came back…”

​Well, hell, he hadn’t considered that he might be a hero. He smiled.