Artist Rodney loves firefighter Hunter so much, he decides to give him up. 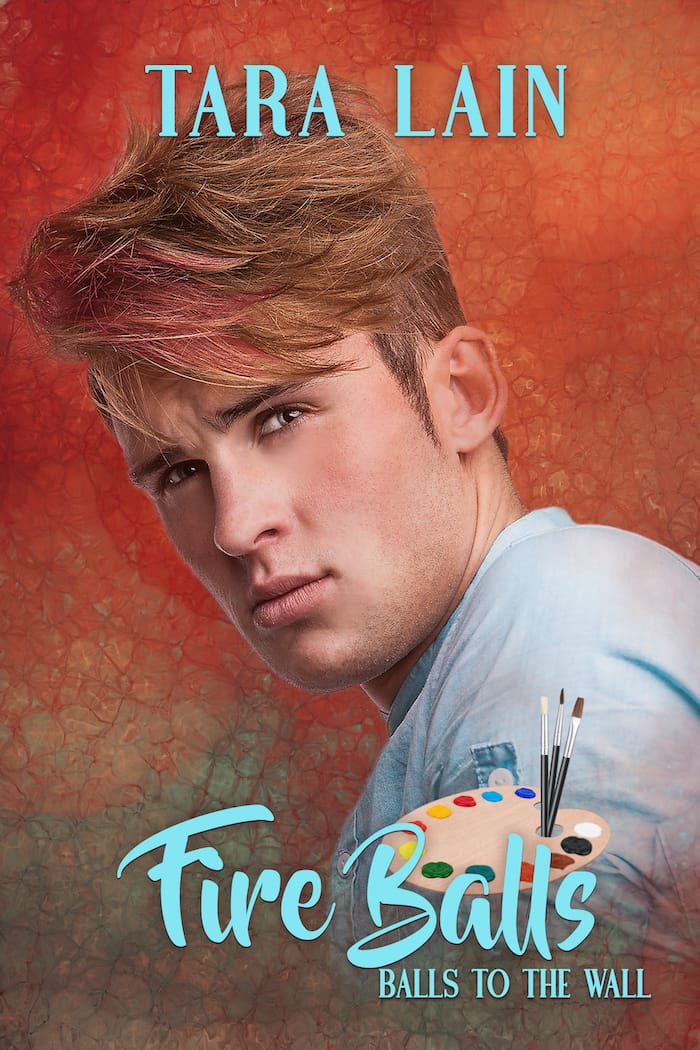 What People Are Saying About Fire Balls

‘Fire Balls’ is a well written, hot love story with fabulous characters, a great plot and unexpected twists and turns. Tara didn’t name it fire balls for nothing. The story also has a strong, important message to impart–‘Above all things, to thine own self be true’. I’d recommend it to anyone who would like to enjoy an exciting, passionate, unpredictable, outrageous story with a very happy ending. Thanks, Tara! I really loved it!

I love an opposites attract themed romance, and in my opinion, Tara Lain hit this one out of the ballpark! Not only is Fire Balls a fast-paced read, but I loved all of the characters in it as well. I’ve read a couple of books by Ms. Lain, and she’s quickly becoming one of those authors that is a must buy for me. I love her easy style of writing and her ability to bring her unique and well-written characters to life.

Nothing had been the same since he’d met Rodney Mansfield. Hunter stared at the statues of strange round people on the fountain outside the stationhouse. He didn’t quite understand this artwork. But he did get Rodney’s. Rod was a genius. His art was masterful.

​Hunter set his book on the side of the fountain. No use pretending he was reading. He’d just stare at the weird sculpture. Funny. Weird is the way Rod described himself. Homo fag. Both were actually true. With his purple-tipped hair. Or blue. Or pink. The multiple earrings. His tiny-sized, bright clothes, and flamboyant manner. They all added up to the kind of gay guy Hunter ran from. But Rod wasn’t a “kind” of anything. He was himself—authentic, special.

​Hunter knew if he could paint, he’d want to paint Rodney. That great face. Jerry called him adorable. The guy’s face was almost pretty. Big eyes and soft, girlish lips. That shock of bleached hair falling in front of those brown eyes, a great contrast to the slim, hard body and big cock. Yeah, Hunter knew up close and personal just how big that cock was.

​He ran a hand through his hair. Couldn’t get the guy out of his mind. The idea of never seeing him again. Never having that cock in his ass. Shit, it made him crazy. He should be glad to be rid of him, but he wasn’t. And he’d screwed any chance of even having Rodney as a friend.

​Deep breath. Hunter had to get his head on straight. Tomorrow was a big day. The call to Bill had been magic. The guy really wanted to help. If the meeting he set up panned out at all, maybe Hunter could grab the brass ring and become a teacher. God, the idea gave him goose bumps. He loved firefighting. But teaching? Wow. Teaching felt real to him.

​Wonder what Rodney would say about him switching jobs?

Hunter shook his head. Get over it.

​The alarm bell shocked him out of his stupor. His body jerked. No thinking, just response. He leaped up and cleared the few yards into the station in seconds, grabbed his gear, and had it on before the rest of the guys made it out of the ready room. “What is it?”

​Cam was also dressed. “Building fire on Laguna Canyon Road. One of the art studios, they said. Tough one. Paint is really flammable.”

​His mind locked on a picture of an old, struggling space heater on an ancient cord. Shit! Rod. But no, he’d be at the Festival manning his stand. Safe. Oh God, please. He hoped. Strictly against protocol, but he fished his cell out of his pants and dialed.

​The voice on the other end sounded worried. “Hunter?”

​“Quick, Jerry. Do you know where Rodney is?”

​“At the Festival. I just heard about the fire. Shit. Is it his studio?”

​“Don’t know yet. All those beautiful paintings. I hope not.”

​“No man, all the paintings are at the Festival. He said he cleaned out most all of his inventory because of the fight. People are crazy for his stuff.”

​“Good. Gotta go.” He clicked off and jumped into the truck, taking his seat beside Cam.
​
​The engine raced down the Laguna Canyon Road.

​They turned into the drive, lookie loos scattering. Flames leaped out of the roof of the low structure where he had first learned what real orgasm meant. The sight hurt Hunter’s heart. If Jerry was right, maybe the real loss—the priceless art—would be avoided, thanks to the fight. Yeah, the fight he ought to feel grateful for instead of pissed off about.

​The firefighters piled out onto the hard-packed dirt drive and hauled the hose toward the hydrant out by the highway. Shit, they were just going to make it…if they were lucky.

​“Save him. Help, please, help,” one woman screamed, pointing toward the building.

​Not a good thing. He gave his spot on the hose to another man and ran to the woman’s side. “Ma’am. What do you mean?”

The woman on the driveway was white as a cloud and pointing, her mouth working. “Rod. Rodney. He ran in. Do something.”

​He gripped her arm. “Ran in? Rodney ran in there?” Ice froze his heart.

​“Yes, yes. I came over to see, and suddenly he just ran past me and straight in the door. I don’t know where his car is…”

​Hell no! He pulled on his respirator and ran toward the door of the studio. His heart beat way too fast. Had to get control. Why, why would Rod do it? What was worth his life? His life. He couldn’t die. Hell, no.

​“Fallon, wait. Don’t go in alone.” Cam screamed behind him.

​The screen door, the damned squeaky screen door, hung half off its hinges. He tore it away and, hunched against the heat, moved into the studio. Smoke. Embers raining down. The heat pushed like a wall through his gear. The flames crawled along the half-missing roof like a snake slinking along a branch, hissing.

​Stop. Think. The part of the structure closest to the door remained most intact. He dropped to the floor and scooted along a few feet. Not much in here. Beside him, the old desk had burned nearly to ash. His heart hammered. Breathe slowly. Don’t panic.
Where is he? Can’t be too late. No, hell, no. Never too late. He crawled another couple feet and pressed his head down by the floor, squinting through the smoke…