Z.A. Maxfield’s LOST AND FOUND with Prizes for You! 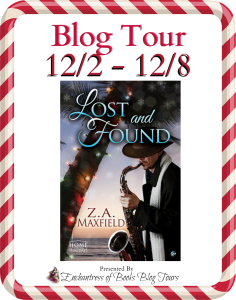 Hi everyone — It’s not every week i get to have the ZAMster on my blog twice! Yahoo. With two different new books which is a boon for all readers. But i couldn’t pass up the chance to share either one of her new releases. But FIRST, If you’re here for the Christmas Paws Blog Hop where you can win $200 and some goodies from me, Click HERE. And if you’re hear for the Thankfully Naughty Blog Hop with yet more Tara Goodies, Click HERE. Now, let me say hi to ZAM and turn the blog over to her and Z.A. Maxfield’s LOST AND FOUND–

Hello Tara Lain! It’s a pleasure to be here at your blog! This makes twice in the span of a couple weeks, but as you know when it rains it pours. Happy Holidays to you all your readers! As the year comes to a close it’s a great time to enjoy a quiet evening with family and friends.

I thought we’d have some fun today and talk about the food in the book. It’s been pretty clear right from the start that I like to write food into a book. I remember reading Harry Potter and being mesmerized by the descriptions of food, from the groaning Hogwarts dining hall tables to the “fat pack of toffees” in the flying Ford Anglia’s glove box. I always want to know what people are eating in books, and when an author doesn’t tell me, I resent it.

That said, let’s get started out with burgers. OF COURSE they’re from In-N-Out. Of course they are. I live in Southern California, and even with the entrance of Five Guys, there is really only one place my protagonist is going to buy a burger, unless he lives close to one of Orange County’s Angelo’s locations. Even then, the odds are good he’s going to go to In-N-Out.

On a side note, I live in one of the ONLY two locations where In-N-Out is not actually a drive-through, but Angelo’s is. Odds are a little leaner in my neighborhood that we’d go to In-N-Out because on a late night burger run (especially those made in pajamas) who likes to get out of the car?

Carnitas – which show up regularly in my books, usually refers to a slow cooked pork dish. My earliest experience with Carnitas (literally little meats) featured a massive pork roast sort of braised in lard and seasoned with all kinds of things, salt oregano, chile cumin, bay leaves. Once the meet is tender and the moisture has evaporated it gets crispy on the outside. I’d be willing to guess most people don’t use lard these days, but when it’s made the old fashioned way it’s a sumptuous, unctuous kind of pork stew. What cooks do sometimes is slow braise the meat and then shred it, THEN cook it over a high heat in oil so it gets crispy. This is so yummy in tacos, over rice, anyway you choose to eat it.

Carne Asada – This is simply thinly sliced grilled, marinated steak. So good. The key is to dry it off before throwing it over the coals so you get a nice char. I cheat and use the marinated carne asada meat from Trader Joe’s. We grill it, then slice it thin or chop it up for tacos. So delicious. Serve it with cowboy style beans or frijoles refritos.

Frijoles refritos – every cook has his/her own way to make refried beans. Aurora, my friend Ana’s mom simply calls it sopa and prepares it the usual way, soaking the beans first and then simmering them with spices and seasonings until they’re tender. She discards the water and mashes them up and then fries them in – you guessed it – lard. Lard rears its (patently delicious) head wherever people who raise pigs for meat are cooking other foods. Nowadays, people put all kinds of stuff in refried beans you’d never ever guess was in there. I once saw a woman put cut in a whole block of Velveeta, which disappeared and became one with the dish faster than the Titanic sank – and making the beans just about as rich. A great debate has raged for centuries: to salt or not to salt beans before cooking. As usual, I play the odds and don’t salt the beans until they’re halfway done.

Tamales – Tamales are a Mesoamerican dish where some kind of filling is placed inside masa (cornmeal) dough and then steamed. It’s traditional in some parts of Mexico to cook tamales for any festival, and it’s traditional in Southern California to eat them during the holidays. I am fortunate enough to have lots of places to buy great tamales for Christmas Eve dinner, and I have also had the privilege of joining my friend Ana and all the women of her family from the youngest to the oldest, as they prepare these delicious treats. We slow braise meat (pork again) and make a red sauce from scratch, which involves softening, frying, and blending a massive amount of different kinds of dried chiles herbs and spices. I still don’t know the magic secret ingredients for Nina Carlotta’s famous red sauce but I do know my eyes burn when she makes it and then I just fall in love with her all over again when I taste it. Amazing stuff. Tamales can be savory and sweet. My favorites are pork with red sauce and green chile and cheese with a spicy tomatillo sauce.

Pan Dulces are sweet breads. (Not like cow sweetbreads which is a whole ‘nother thing entirely.) Pan dulce shows us the influence of the Europeans who made their way to Mexico during its many colonial incarnations. These are hard to describe as there are many types of pan dulce. They run the gamut from traditional sweet dough like you’d find in a cinnamon roll to the flavored yeast dough of a King Cake from New Orleans to a crumbly, odd bread that reminds me weirdly of Chinese almond cookies. Or not. They’re kind of a you-have-to-be-there thing. If I’m going to be hosting a gathering with tamales and a taco bar, then I’m probably going to get some of those sweet treats from the bakery as well.

Tres Leches Cake –This cake is YUM. It’s a sponge cake soaked in evaporated milk, condensed milk and cream. Its vanilla flavor is important, so no skimping or using vanilla flavoring. Use the best vanilla or don’t bother because you’ll taste the unsavory false vanilla flavor long after you eat the cake.

And let’s face it. You go straight to Food Prison for eating Tres Leches Cake. No passing Go, no collecting $200. A little dab will do you — it’s very rich. My friend Ana garnishes hers with fresh berries when they’re super-ripe in season and it’s a revelation. Double YUM, with fresh fruit.

Join Ringo as he introduces Gavin to his family during a — sort of — traditional Southern California Christmas Eve feast in Lost and Found. 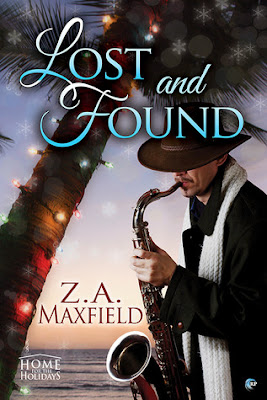 Lost and Found
By Z.A. Maxfield
Blurb:
Lost: one dog and
two men in need of each other. Found: love.
RV resort
security chief Ringo never believed in love at first sight . . . until he saw
Gavin playing his sax on the beach for the tourists. But their on-again,
off-again affair—even counting all the great makeup sex—doesn’t come close to
the relationship he wants. All he really wants for Christmas is a commitment
from Gavin.
Instead he
discovers that Gavin has had surgery without telling him, so he lays down a
relationship ultimatum while Gavin recuperates. Complicating matters even more,
Gavin’s beloved dog Bird runs away, and Gavin blames Ringo for the
disappearance.
While Ringo
throws every resource he has into finding Bird, he learns deeper truths about
Gavin—how hard it is for him to trust and how little faith he has in love.
Maybe if Ringo can find Bird, he can salvage Gavin’s faith. Maybe this
Christmas, they can all find each other.
You can read an
excerpt or purchase Lost and Found HERE. Remember, when you purchase Lost
and Found in either ebook format, which you can find HERE or in
the print anthology format, which you can find HERE,
you’re helping to support the mission of the Ali Forney Center.

You can find ZA Maxfield at