Hi. I’m so happy to welcome the amazing author and my friend Shira Anthony to the blog with her new release, The First Step. Shira is helping me launch my new Special Guest series. From time to time, I’ll share posts from exciting authors with new releases just to help everyone stay up to date on what’s hot!

Shira Anthony was a professional opera singer in her last incarnation, performing roles in such operas as Tosca, i Pagliacci, and La Traviata, among others.  Shira loves a great happily-ever-after and never writes a story without one. She’s happy to write what her muse tells her, whether it’s fantasy, sci fi, paranormal, or contemporary romance. She particularly loves writing series, because she thinks of her characters as old friends and she wants to visit them even after their stories are told. 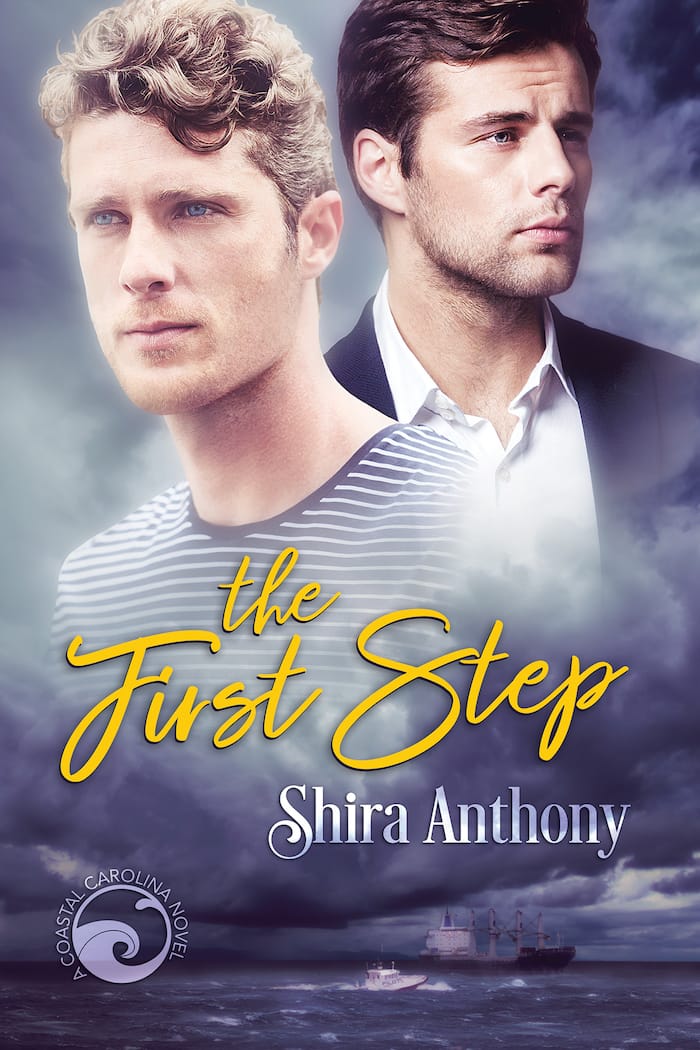 The First Step by Sira Anthony

Thank you, Tara, for letting me share my latest release, The First Step. The novel is the first in a series of interrelated stories of men who live and work at the North and South Carolina coasts. Men like gorgeous but prickly Justin Vance, who makes his living as a harbor pilot, hopping across ten feet of water in the middle of the ocean to climb aboard huge container ships and steer them safely into port.

The First Step takes place before, during, and after Hurricane Florence, which dumped feet of water on the North Carolina coastal communities in the Wilmington area, where the story takes place. It’s a romance, first and foremost, but it’s also a harrowing ride through a frightening and deadly storm.

Wilmington, North Carolina, the setting of the story, is one of my favorite coastal cities. It’s close enough that you can drive to the beach in just a few minutes, or head down the Cape Fear River on your sailboat (like we often did) to Bald Head Island and Southport. Our boat weather Hurricane Florence and we’re grateful she survived with just a little cosmetic damage from water than flooded in from the cockpit. Many other boat owners, not to mention homeowners, are still dealing with the storm’s aftermath.

I’ll leave you with a little taste of that terrible storm, where one of the MCs in the story, New York reporter Reed Barfield, is taking photos on the beach as the storm approaches. He’s a smart man, but when his head is into a story, he doesn’t exactly make great choices regarding his personal safety. Luckily for him, Justin comes to his rescue.

Reed lifted his camera again and took a photo of the gulls, then aimed his lens out to sea and focused on the breaking waves and the way the water flew upward as they roiled and churned.

After a while his arms began to ache, and he let the camera hang around his neck. He pulled out his phone and glanced at the time: 5:30 p.m. Just then, a huge gust of wind nearly knocked him off his feet and splashed the phone. He wiped the water off the screen, thankful once again for the waterproof case.

Five thirty? Shit. The last time he’d checked, it had been a few minutes before three. He walked under the pier, where the rain and spray weren’t as heavy, then tapped the screen. No reception. He sighed.

Time to head back. Justin would be irritated, but it was only ten blocks or so. He slipped his soggy shoes back on and followed the trail over the dune. He reached the street, but it was flooded.

He rolled his damp pants up to his knees, realizing how futile the gesture was since they were soaked through, then pulled off his shoes and waded in. By the time he reached the middle of the street, the water was knee-high. Not pleasant but doable. He smiled when he imagined the hot shower he’d take at Justin’s, his smile broadening when he added Justin to the shower fantasy.

He nearly reached the other side when he slid on something and fell headfirst into the muddy water. He got to his knees and tried to stand, but the asphalt must have been covered in mud because he slipped again, this time scraping his knee in the process.

“Shit.” His knee stung as he finally got back to his feet. He looked up to see someone on the curb dressed head to toe in rain gear, offering him a hand. He grabbed on and the man pulled him out of the water. “Thanks.”

“Yep.” Justin pushed back the hood of his jacket and glared at him. “He’ll be back by three, he says. He won’t do anything stupid, he says.”

“Got distracted?” Justin scowled. Judging by the tension in his jaw, he was pissed. “Yep. I figured as much.”

Reed hadn’t noticed they were the only ones around. Even the vans with the news crews had disappeared. “Everyone’s gone. Shit, I—”

“That’s because it’s dangerous out here.” Justin pulled him down the street to a parking lot, never letting go of Reed’s hand. “Get in.”

“I’m going to get the truck all muddy.”

“Get your ass inside.”

Justin’s shoulders tensed as he started the truck.

Justin banged the steering wheel with a fist. “The hell, Reed,” he nearly shouted. “How many times do I have to save your ass? You’re going to fucking kill yourself one of these days.”

“You’re always sorry. Except you aren’t at all, are you? It’s all bullshit.” Before Reed could respond, Justin continued, “You’ve got the apology down pat, but you do whatever the fuck you want. You don’t give a shit that someone might actually care what happens to you.” Justin shook with anger.

“Hey.” Reed put a tentative hand on Justin’s forearm. Justin didn’t push him away, but he didn’t look at him either. “I really am sorry I put you through this again. And you’re right. I should think about other people. I—”

Justin grabbed Reed and held him so tight, it almost hurt. He must have realized this, because he eased off a bit, although he didn’t release Reed either. “When you didn’t come back… I wasn’t… I didn’t know… I thought maybe this time… I didn’t know if I could handle it if something happened.” Justin’s voice broke with this last admission.

Reed swallowed back a wave of powerful regret. “You’re right.” He sighed against Justin’s cheek. The warmth was back again, more powerful than before. Knowing Justin cared enough about him to be that angry made Reed feel really good.