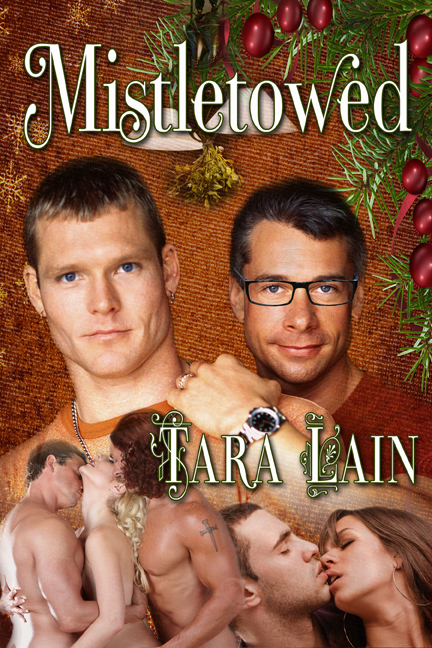 Hi — Are you here for the Naughty or Nice Blog Hop? If Yes, Click Here! Or the QTA Christmas Hop? Click HERE. You can win tons of prizes at both of these Hops, so be sure to check them out!

Here’s a special Holiday goodie for you. I just re-released my quirky, sexy, holiday romp, MISTLETOWED. This is edited from the original and has this brand new cover by Lex Valentine. This book used to cost over $5.00 but you can get it at Amazon for 99 cents as a holiday gift from me to you. Click HERE to access the book for 99 cents.

MISTLETOWED is a crazy little book, but its gotten wonderful response. Some people have called it their favorite holiday story. It concerns five close friends — two couples and their gay pal — who end up having a party for Yule with two other men who have been invited at the last minute. One couple has a piece of mistletoe they got in a Druid ceremony and the sprig is supposed to have the power to bring soul mates together. Let’s just say that they all; end up happier than they start, but it’s a wild ride getting there.

“Probably not, but I’m worried about Christian, and I hoped he was with you.”

“I think he took off toward Laguna, but that was a few hours ago. He was pretty upset when he left.”

“Oh, his boss was making slurs at people, and Christian took offense. Seriously, it was kind of weird. Usually he’s easygoing, but the last few days he’s been so different. Unsatisfied. Questioning. Like what he wants has changed. I don’t get it. Anyway, if you see him, would you ask him to call home? He’d had some to drink, and I’m getting pretty freaked.”

“I wouldn’t worry. He’s been working so hard. He needs some rest. But yeah, I’ll tell him to call if I find him, okay?”

“I’ve got one thought where he might be, but it could be nothing. I’ll check it out.”

“Thanks. You’re such a good friend.”

He hung up and stared at the phone. Christian having a crisis? Mr. Equanimity? That was weird. But he had a hunch. Mel said he’d headed toward Laguna. Not many places were open this late, but Christian had always liked the Sea Shell Bar. He grabbed a coat and scarf and set off on foot.

It only took a few minutes to get his suspicions confirmed. Standing in the doorway at the Sea Shell, he was witness to a sorry sight. And also a very confusing one. Christian was there, all right. Drunk as the proverbial skunk, golden head hanging, but still somehow managing to look gorgeous. On either side of him, like hounds after the skunk, were two guys, both gay. Jason knew them. They leaned in and appeared to be vying for Christian’s attention, which Jase didn’t get, since he knew neither guy was into hitting on straight men. All Christian had to say was get lost, and they’d be gone. But they weren’t gone. Maybe his friend was just too drunk to communicate.

He walked up behind Christian and put a hand on his shoulder. “Hey, buddy. I found you.”

Christian raised his head with difficulty. Finally his eyes seemed to focus. “Jase, my friend. Jase.” He lazily rolled his head from side to side. “Guys, this is Jason. Isn’t he beautiful, my friend? Isn’t he the purtiest mathemagician you ever saw?”

What in the hell was Christian saying? Made no sense. “Come on, buddy. Let’s get you home.”

“Not goin’ home. Gonna get my cock sucked.”

Both men looked embarrassed and glanced around at the few remaining customers, then back at Jason.

Christian leaned back against Jase and closed his eyes. What a warm weight. Jason raised an eyebrow at his acquaintances. “What’s going on? He’s straight. What’s he talking about?”

The bigger man, all shaved skull and rippling muscles, shook his head. “Straight, my ass. He’s been coming on to both of us for hours.”

The other guy nodded in agreement.

Jason gave them a disgusted look. “Hours? Doesn’t that tell you something right there? If he was serious, he’d have been in one of your beds for an hour by now.”

“Maybe. But that guy is so gorgeous, I wasn’t going to pass him up.”

The other man — smaller, slim — shrugged. “Frankly I think it’s you he wants. He hasn’t stopped talking about you since he got here. Kind of a turnoff, but like Wendell said, he is really pretty.”

Jason shrugged. “I’m just the only gay guy he knows. No basis for comparison.” He propped Christian up. “Come on, bro, let’s go to my house.”

“Oh good. Will you suck my cock, Jase? That would be the best thing of all. Would you?”

Oh shit, this was so not happening! “You’re drunk. Let’s go.”

He managed to get Christian on his feet and moving. Wendell stepped forward. “Need help?”

Jason was a couple inches shorter than Christian and even more slender, but he figured he was strong enough unless Christian went deadweight on him. “I think I got it.”

Thank you so much for coming by! Don’t forget to enter to win! : )