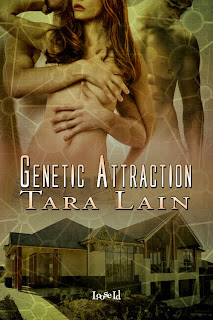 Hi all–
Probably by now you have heard me yelling all over town because i’m so excited to be a double CAPA nominee. These awards from The Romance Studio honor excellence in romance of all genres. First, i’ll tell you i am AMAZED to find that i was nominated as Favorite Author. This list of 19 writers includes some of the best-known and most popular romance writers around– and little me. I am so honored to be named in the same breath with these people and i’m dancin’!

Equally fantastic, my book, Genetic Attraction, is nominated in Contemporary Romance. This MMF menage was my first published novel and is still being discovered by new readers every day.  So today i want to feature an excerpt from this book. You’ll notice i have a warning on my blog for adults only. Usually i don’t need it.  Today i DO!!  LOL

Excerpt ADULT: Genetic Attraction by Tara Lain; M/M/F Contemprary
Loose Id    Amazon   Fictionwise
At a conservative Long Island University, renowned researcher, Dr. Emmaline Silvay, has two great loves – her life-saving work, and her younger research partner, Jake Martin. The romantic love is impossible. She’s his boss and he lives with his girlfriend. The the “girlfriend” is actually a boyfriend, the beautiful and infamous supermodel, Roan Black.
Resigned to a platonic relationship, Em accepts a weekend invitation to their home, but the men have a menage on their minds. She can’t resist, doesn’t even want to. But their intentions go far beyond passion. They want her to “be a part of them”. Their three-way love defies propriety and the standards of the University that funds their work. The supermodel’s fame makes secrecy impossible. Their ménage threatens to crumble all she’s worked for. What will give way to make room for genetic attraction?
They made the short ride to the hotel with his hands up her skirt and hers in his pants, not saying a word, just feeling and kissing each other until they were both dripping. As they pulled up to the hotel, he stuffed himself back into his pants and tried to adjust his jacket down over his massive erection. She just pulled off her wet thong, stuffed it in her purse, and stepped out of the car commando. By the time they got to the elevator, they were both giggling and wild to fuck.
An obviously well-heeled elderly couple rode the elevator with them, and Em tried to behave, but Roan kept reaching down and licking her neck and ear. She’d slap at him but couldn’t stop giggling. When the older couple got to their floor, the lady looked back at Em, winked, and said sweetly, “Have a nice night.”
She and Roan burst out laughing as the doors closed, and then they attacked each other while the elevator continued to the penthouse. Roan picked her up, so she could wrap her legs around him and grind her bare, throbbing pussy against that enormous bulge. Oh God, after all the emotional turmoil, it felt like heaven to just get lost in sex. She rode up and down on him, probably ruining that beautiful suit, but God it felt good.
On the top floor they staggered out of the elevator and straight into Roan’s suite. She was vaguely aware that it was beautiful and overlooked the whole city. He carried her straight to the bedroom, panting in her ear.
“Oh baby, I want to fuck you so bad.” He tossed her on the bed. Her full skirt wound up around her waist, baring her naked pussy. The sight seemed to enthrall him, so she spread her legs, making the very wet lips gape. She was still wearing her heels.
Roan groaned while ripping off his belt and pulling the slim trousers down, revealing tight black boxer briefs that were grossly distorted by his enormous erection. Somewhere he had toed off his loafers. He pulled off socks and shoved the briefs down and off, freeing that indescribable cock to stick out under his still-buttoned shirt.
In one move he was on the bed, and shoving that huge rod into her soaked vagina.
Oh God, she’d almost forgotten what that much cock felt like. Real, serious friction. Just this side of pain, she felt so full, so stretched — so complete.
He thrust and thrust, head thrown back, eyes shut tight. She wrapped her legs around him, letting the heels of her pumps press into his flexing ass. A little pain with his pleasure?
He screamed. “Oh, shit, yes!”
The huge pumping cock hit against her womb in one out of three strokes. He was too far gone to stop, and she was too far gone to care, strapped to him with arms and legs like a monkey, pounding her hips up onto his cock, eager to take all of him as he ground against her clit.
The pressure and the pleasure morphed into one huge cloud of feeling, surrounding and filling her until she exploded, energy shooting up her spine, through her womb, and into her head, until she thought she might black out. She screamed Roan’s name over and over, and he cried out with her and kept crying as he pumped and pumped. Suddenly semen was leaking from her channel. Oh my God, young men came so hard — so good.
Gasping, Roan rolled to the side so as not to crush her. He gave a little laugh. “I think we needed that.”
E-mail:                   tara@taralain.com
Website:              https://taralain.com
Author blog:       http://taralain.blogspot.com
Book blog:           http://beautifulboysbooks.blogspot.com
Goodreads:        http://www.goodreads.com/author/show/4541791.Tara_Lain
Savvy Authors:  http://www.savvyauthors.com/vb/member.php?2398-Tara-Lain
Twitter:               http://twitter.com/taralain
Facebook:           http://www.facebook.com/people/Tara-Lain/100001514105686
FB Page:       http://www.facebook.com/pages/Tara-Lain/205042046209804

Thank you so much for visiting the blog. I hope you come back soon. We have a HUGE Blog Hop occurring here on Jan 4th. Sixty plus writers, amazing contests and a Kindle Fire as a grand prize and a $50. Amazon GC as a second prize. You don’t want to miss it.  Happiest holidays.  :  )